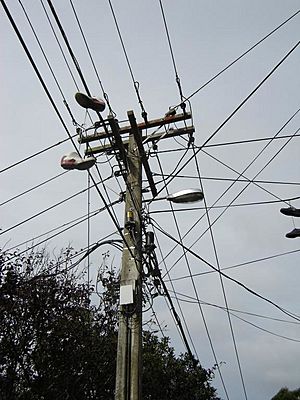 A utility pole, telegraph pole, telephone pole, power pole, or telegraph post is a post or pole upon which telephone network equipment is situated. Similar poles are often used for electricity cables (with pylons being used for only the higher voltage applications) and frequently a pole will share both power and communications lines. Telegraph poles first became commonplace in the middle 19th century. At first they had only one wire, then in urban areas many. In Canada, the poles are commonly referred to as hydro poles, as the electric companies commonly have "Hydro" in their name.

Utility poles are usually wooden, but vary greatly from nation to nation. Other common utility pole materials are steel and concrete, with composites (fibreglass) becoming used more often. In some countries, for example the UK, poles have sets of brackets arranged in a standard pattern up the pole to act as hand and foot holds for those working on the equipment or connections atop the pole.

All content from Kiddle encyclopedia articles (including the article images and facts) can be freely used under Attribution-ShareAlike license, unless stated otherwise. Cite this article:
Utility pole Facts for Kids. Kiddle Encyclopedia.