Mount Pinos (/ˈpaɪnoʊs/) (Samala: 'Iwɨhɨnmu) is a mountain located in the Los Padres National Forest on the boundary between Ventura and Kern counties in California. The summit, at 8,847 feet (2,697 m), is the highest point in Ventura County. The mountain is the highest point of the Transverse Ranges west of Tejon Pass, as well as the southernmost point of the Salinian Block.

Mount Pinos was named after its pine timber, "pinos" meaning "pine" in Spanish.

The summit of the mountain itself is relatively flat and open with several subsidiary summits. Open stands of conifers separated by chaparral shrub areas predominate.

The view from the summit on a clear day encompasses the southern Central Valley, the southernmost Sierra Nevada, much of northern Ventura county, much of the Santa Barbara County mountains, the Caliente Range and the Carrizo Plain. The trace of the San Andreas Fault, clearly visible to the northwest, cuts between Mount Pinos and the mountains immediately to the north. The trace extends all the way to Soda Lake in the Carrizo Plain along the Elkhorn Scarp. The lights of Bakersfield and surrounding towns are visible on a clear evening to the north and northeast.

The mountain primarily consists of granitic rocks of the southern Salinian Block, in contrast to the nearby San Emigdio Mountains, which is primarily made of Precambrian metamorphic rock or Cenozoic sedimentary rock. Mount Pinos is therefore considered a geologically separate formation.

The small community of Pine Mountain Club lies due north of Mount Pinos. Lake of the Woods and Frazier Park are about 10 miles (16 km) to the east. 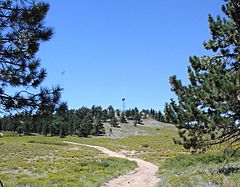 Summit of Mount Pinos in the summer, from the east southeast

The summit plateau experiences harsh winters in comparison to most of Southern California. Most of the precipitation falls as winter snow. The area experiences several feet of snow each year with snowfields lasting till early June on the north facing slopes. In heavy snowfall years snowfields can last till late July or later. Temperatures fall to near freezing most days but can drop well into the single digits in the coldest months.

Habitats on Mt. Pinos include:

Mount Pinos is considered by ecologists to be home to one of the most significant populations of birds of prey in California. In the area live five owl species, Northern Goshawks, as well as California Condors.

It is also home to alpine endemics such as the mountain quail, Clark's nutcracker, Steller's jay and pygmy nuthatch (best seen in campground), as well as hermit warbler (typical during migration) and green-tailed towhee.

The summit of Pinos can be reached by a 2-mile (3.2 km) hike along a dirt road from a parking area at the end of Los Padres National Forest Road S349S. The trail continues to the west entering the Chumash Wilderness and ends at Mount Abel (Cerro Noroeste). Almost all of this 6-mile (9.7 km) trail is above 8,000 feet (2,400 m). 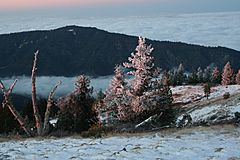 Consistent snow conditions on Mount Pinos allows for many types of winter recreation. This includes Backcountry skiing, cross country and telemark skiing, snowshoeing, snowboarding, sledding, and snow camping. The network of ski trails and backcountry ski and snowboarding bowls on Mount Pinos are documented on several locally produced maps. The ski trails are part of a dispersed recreation area administered in partnership by the United States Forest Service, Los Padres National Forest and the Southern California Nordic Ski Patrol. The patrol operates the Nordic Base facility on weekends only in the winter. It is located at the top of Mount Pinos Road and adjacent to the Chula Vista parking lot.

From the Chula Vista parking lot a trail network spreads both uphill towards Condor Point and downhill reaching as far as McGill Campground. Skiing and boarding are also available in backcountry bowls on the north face of the peak and ridges that drop all the way down the mountain to about the 6,000-foot (1,828.8 m) level. Popular destinations include Condor Point, 1st and 2nd Meadows, and Inspiration Point. The Overlook trail accesses the North Ridge area which hosted an alpine ski area during the 1960s. The area lifts were rope tows situated on the three fingers of the drainage just north of Overlook trail.

More ambitious back country skiing can include trips to nearby Sheep Camp on Sawmill Mountain, Mount Abel (Cerro Noroeste) and if snow conditions allow a descent all the way to Pine Mountain Club.

During and immediately after heavy snow storms it may not be possible to drive to the top of Mount Pinos Road due to the lack of snow plow availability. In such cases it is common for the Kern County Roads Department to close a snow gate lower on the mountain. It is still possible to ski from the snow gate and enjoy the lower slopes of Mount Pinos. Snow at lower elevations also facilitates cross country skiing to Iris Point which provides great views of Lockwood Valley.

It is important to note that some of these trails depend on sufficient snowpack. The trails are not declared hiking trails in the summer and consequently a separate hiking map is available from the Forest Service.

Other nearby recreational opportunities include astronomy, fishing, off-roading, horseback riding and bouldering.

Mount Pinos is often referred to by Adam Carolla on his radio show and podcasts. 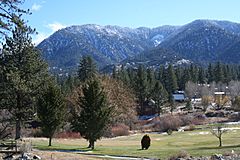 Mount Pinos is considered to be one of the best viewing sites in Southern California due to its relatively low light pollution, dry air and frequently clear skies and is one of the favorite gathering places for amateur astronomers in the region. The usual viewing area is not the summit of the mountain, but the large tree-surrounded parking area of Chula Vista Campground at the end of the paved road about two miles east of the peak.

All content from Kiddle encyclopedia articles (including the article images and facts) can be freely used under Attribution-ShareAlike license, unless stated otherwise. Cite this article:
Mount Pinos Facts for Kids. Kiddle Encyclopedia.