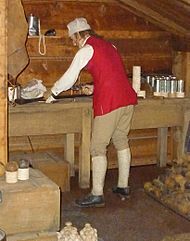 A gunsmith is someone who makes and or designs guns. The job of a gunsmith is similar, but not the same as an armorer. The origin of the word gunsmith dates back to the 1580s.

The first firearms can be dated to about the 1200s in China. In Europe, the first gun barrels were made by Italian craftsmen. But gunsmithing was new in the Middle Ages. For a long time they did not have their own guilds and many joined blacksmiths’ guilds. By the mid-1400s, there were enough gunsmiths to form their own guilds. One of the first was in 1463 in Suhl, Germany. England did not develop gunsmiths as quickly as other European countries and to change this, King Henry VIII invited leading gunsmiths in Europe to come live and work in England. Many accepted and not long afterwards more gun shops began appearing in England. Several appeared in London near the Tower of London, which held the country's stockpile of guns. Soon they were training English citizens in this new trade. 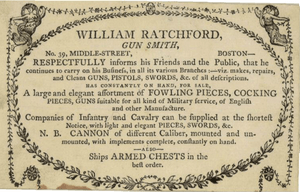 An 1802 sign for "William Ratchford, gun smith" in Boston

Before the American Revolutionary War in the American colonies, gunsmithing was a time-consuming process. Gunsmiths were generally gun makers who repaired their own weapons for their customers. These gunmakers came to the American colonies along with other craftsmen from England, and later from Germany and Switzerland. These were countries with long histories of gun making. Gunsmiths learned their trade by becoming an apprentice to an established gunsmith or gun maker. They worked from their adolescence into early adulthood before they could open a shop of their own. Handguns were relatively cheap and were made in large shops in England. So American gunsmiths repaired and modified imported pistols. However, muskets and rifles were not imported as much and local gunsmiths would custom make these for their customers. Their work included carving stocks, engraving metal pieces, and forging gun barrels. It could take as many as 400 hours to create guns by hand. Soon entirely new guns were created such as the Pennsylvania rifle (later called the "Kentucky rifle"). This was the product of German gunsmiths who immigrated to Pennsylvania in the early 18th century. It was lighter, longer and more accurate than European designs. The rifle soon became the favorite of colonial settlers and Frontiersmen.

About the middle of the 18th century, gunsmith Honoré Blanc developed the concept of interchangeable parts for muskets. Blanc tried to interest other European gunsmiths, but they were not impressed by the idea. But he did interest the American Ambassador to France, Thomas Jefferson. Jefferson quickly saw that mass production of weapons parts would free America from dependence on European sources for parts. He couldn't get Blanc to move to the United States but he did convince President George Washington it was a good idea. In 1798, Eli Whitney got the first contract for 12,000 muskets built under the new system. Whitney used a large force of unskilled workers and machinery to produce standardized identical parts at a low cost. This was about the time Gun manufacturers began to be distinguished from gunsmiths.

All content from Kiddle encyclopedia articles (including the article images and facts) can be freely used under Attribution-ShareAlike license, unless stated otherwise. Cite this article:
Gunsmith Facts for Kids. Kiddle Encyclopedia.