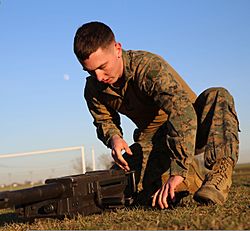 Marine armorer assembling a machine gun in the field

A modern armorer is someone whose job is repairing, assembling and testing of small arms. Originally, an armorer was a person who created armor for medieval knights and noblemen. Today an armorer is someone who belongs to an organization such as the police or military and who maintains guns and weapons belonging to that organization. An armorer keeps these weapons in top working condition always ready for trouble-free use in the field. By doing this an armorer extends the service life of these weapons at minimum cost to the organization. A failure of a weapon in a crucial situation could cost lives. Their job is similar (but not the same) as that of a civilian gunsmith.

The medieval armorer had to be a combination of scientist toolmaker, chemist, metallurgist, engineer and artist. He was highly skilled and worked with wood and leather as well as metals. An armorer also had to understand mathematics and geometry. Much of his work revolved around high-end blacksmithing. Because he did custom work and produced high quality armor for nobles and knights, he was paid more money than a blacksmith was. Each suit of armor was made to order and would fit that person exactly. If any part of the suit of armor was damaged in battle, the armorer would repair it. In time of war an armorer also made armor for soldiers.

In addition to making mail (also called chain-mail), after the 14th century they began making plate armor. Armorers could also specialize in what type of armor they produced (mail or plate). They also specialized in various tasks involved in creating armor. For example a fourbor was a someone who polished armor. Armorers often belonged to a guild. Later there were guilds for mail armorers, plate armorers and for armorers who specialized in helmets.

Weapons kept in an armory

In a modern police department, an armorer inspects, maintains and repairs firearms to the standards required by the manufacturer's warranty. An armorer cleans and adjusts all the handguns used by police officers. He or she also maintains the shotguns, semi-automatic and automatic weapons the officers must depend on in a crisis. Other equipment maintained by armorers includes gas masks, gas-grenades, smoke grenades and similar devices. An armorer is often involved in training other members of a department in chemical warfare equipment and practices.

In the various militaries around the world, armorers often maintain the armory of a military organization. An armorer instructs military personnel on the proper maintenance and care of weapons issued to them. The armorer maintains receipts for equipment issued locally and also while on deployment. He or she is responsible for inspecting and repairing all arms they are responsible for. On ships, an armorer is responsible for the correct working of all weapons used by marines and sailors onboard that vessel.

On a film crew, an armorer is the person responsible for all the weapons and firearms used during the production. Armorers work with the producer, director and property master to create a list of all the weapons that will be needed. Sometimes the prop master is also the armorer. Often they research the style of weapons used according to the period and the kind of movie. For specialty weapons the armorer consults with the production designer and the prop maker. The armorer is responsible to make sure all weapons are used comply with federal and local laws. For scenes outside the studio, armorers work with police departments to get the necessary permits. To get the weapons they need, armorers may rent or lease them from licensed armories. Many movie armorers also have their own collection of weapons they may use. Armorers explain safe weapons handling to actors and crews making certain all safety rules are met. It is their responsibility to make sure nobody is hurt while weapons are being used.

All content from Kiddle encyclopedia articles (including the article images and facts) can be freely used under Attribution-ShareAlike license, unless stated otherwise. Cite this article:
Armorer Facts for Kids. Kiddle Encyclopedia.