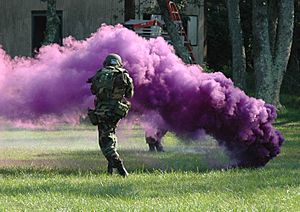 A purple smoke grenade being used. 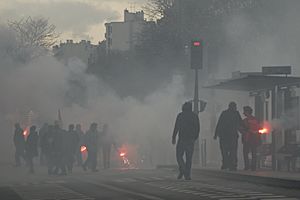 Smoke grenades in use, at a demostration in Paris, in 2008

A smoke bomb or smoke grenade is a bomb that produces a cloud of smoke. It can be used as a toy to make large clouds of colored smoke. It is normally used in the military though. Smoke bombs are used to hide positions and objects from sight behind a thick cloud of smoke. Armies also use smoke grenades to hide soldiers from the enemy. Smoke grenades can be used to mark a spot on the ground (for example, a spot where you want a helicopter to land). Smoke bombs can be thrown or shot. They normally contain a powdered chemical that is ignited. It produces a large cloud of smoke quickly. Then something else starts burning, keeping the smoke cloud thick.

All content from Kiddle encyclopedia articles (including the article images and facts) can be freely used under Attribution-ShareAlike license, unless stated otherwise. Cite this article:
Smoke grenade Facts for Kids. Kiddle Encyclopedia.