Kids Encyclopedia Facts
This page is about the museum. For the ranch, see Glenbow Ranch Provincial Park. For the rural community, see Glenbow, Alberta.

The Glenbow Museum is an art and history museum in the city of Calgary, Alberta, Canada. It was established by philanthropist Eric Lafferty Harvie.

The Glenbow-Alberta Institute was formed in 1966, when Eric Harvie donated his vast historical collection to the people of Alberta. It was initially funded by $5 million each from Harvie and the Alberta government. Located in downtown Calgary across from the Calgary Tower, the Institute maintains the Glenbow, open to the public, which houses not only its museum collections, but also a very extensive art collection, library, and archives. In 2007, a permanent exhibit entitled Mavericks opened on the third floor; this exhibit traces the history of Alberta through a series of 48 influential and colourful personalities. As of 2013, the president and CEO is Donna Livingstone, formerly Vice President of Programs and Exhibitions and a member of the Board of Directors. Former presidents and CEOs include Mike Robinson and Jeff Spalding.

The Glenbow archives are one of Canada's largest non-governmental repositories and a major research centre for historians, writers, students, genealogists, and the media. They comprise an extremely large collection of archival records of individuals, families, organizations and businesses from Western Canada and includes 3,500 metres of textual records, over a million photographs, 350 hours of film footage, and 1,500 sound recordings. The archives range from the 1870s to the 1990s, documenting the social, political and economic history of Western Canada, particularly Calgary and southern Alberta. Areas of specialty include First Nations, Métis genealogy, the Royal Canadian Mounted Police, ranching and agriculture, the petroleum industry, politics, labour, women, and business. Unique collections in the archives include catalogs, cookbooks, records of land sales by the Canadian Pacific Railway, maps, school yearbooks, extensive genealogical resources, and an excellent collection of resources for the study of Métis genealogy.

The Glenbow's art collection comprises 33,000 works, mainly dating from the 19th century to the present, primarily historical, modern, and contemporary work from or pertaining to the northwest of North America. The collection contains a selection of landscape painting, a Canadian prints collection including works from Walter J. Phillips and modernist printmaker Sybil Andrews, First Nations and Inuit Art, American illustration, and wildlife Art. Works from other parts of the world provide a broader national and international frame of reference.

The Glenbow's library contains 100,000 books, periodicals, newspapers, maps, and pamphlets with relevance to Western Canada, from the time buffalo roamed the plains, to the coming of the railroad and settlement of the West, to political, economic and social events in Alberta today. The collection includes rare illustrated equestrian literature from the 15th century, school books from one-room school houses, and numerous volumes and other material related to the museum's collections of military history, ethnology, mineralogy and art.

The museum's collection includes artifacts from Western Canada, and various other cultures around the world. In addition, the museum houses a collection of gems and minerals. 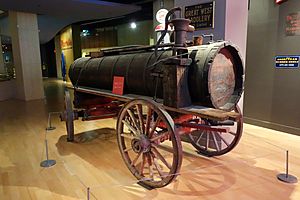 An oil wagon used at the Turner Valley oilfields, c. 1920, on display at the Glenbow Museum.

The collection contains over 100,000 objects originating from many corners of the world, providing insight into the life in Western Canada from the late 19th century to the present day. Included in the Community History collection are artifacts from the Doukhobor and Hutterite communities of Western Canada, and the Calgary Stampede. The museum also holds several items from the search parties for Franklin's lost expedition.

Several items from this collection are featured in the Mavericks: An Incorrigible History of Alberta exhibition. The permanent exhibit tells the history of Alberta through the stories of 48 individuals, or "mavericks". 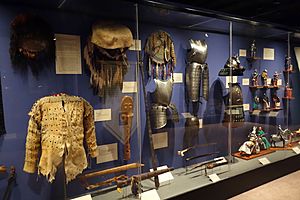 An exhibit of arms and armour from the museum's military collection

The Arms and Armour portion of the collection features a number of European and Japanese arms and armour. In particular, the museum's collection of Japanese armour and arms is the largest collection of its kind in Canada. The collection sorted under Canada at War primarily focuses on the role of Canada, and Alberta, during the North-West Rebellion, World War I, World War II, and the Korean War. The Mounted Police section includes a number of artifacts relating to the development of the North-West Mounted Police, and its successor, the Royal Canadian Mounted Police.

The Glenbow's military collection is the most diverse in Western Canada, with 26,000 items. This includes 2,100 firearms, ranging from the 16th century to present day, in the Firearms section of the Military and Mounted Police collection. Most of the artifacts from the museum's Famous People and Battles section were artifacts acquired from the Royal United Services Institute. In June 2008, the Glenbow Museum and the University of Alberta acquired a number of artifacts from Sam Steele, an officer of the North-West Mounted Police, and the commanding officer of the Strathcona's Horse in the Boer War. 60 objects from the Sam Steele collection are on display at the Glenbow Museum.

Many items from the museum's Military and Mounted Police collection are on display at the Warriors: A Global Journey Through Five Centuries exhibition. The exhibition is a permanent exhibit at the museum which compares cultural approaches to war throughout history.

The museum's Minerals collection includes minerals and precious and semi-precious stones from around the world, particularly Western Canada. The exhibit includes minerals that glow in the dark, a display of fool's gold, a piece of the Earth's oldest rock, and rock crystals in every colour of the rainbow. Specimens were selected for exhibition value as well as mineralogical significance.

A number of items from the museum's Mineral collection may be viewed at the Treasures of the Mineral World exhibition, a permanent exhibit at the Glenbow Museum. 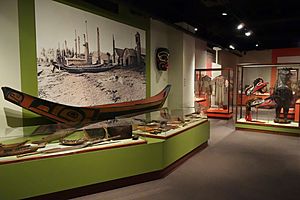 Artifacts from the indigenous peoples of North America on display at the Glenbow Museum.

The Native North America collection is a large collection of artifacts from various indigenous peoples of North America, particularly the Plains Indians. The museum sorts its Community History collection in the following manner, Inuit, Métis, Northwest Coast, Plains, and Other First Peoples.

The Plains section places a particular emphasis on the indigenous peoples of the northwestern Plains, including the Anishinaabe, the Niitsitapi, Cree, and Tsuut'ina Nation. The Northwest Coast section of the Native North America collection focuses on the Indigenous peoples of the Pacific Northwest Coast, most notably the Kwakwaka'wakw, and the Nuu-chah-nulth. The Other First Peoples section includes artifacts from other Canadian First Nations groups, including the Dene, Iroqouis, and Mi'kmaq.

The Glenbow ethnology collection contains approximately 48,000 items. Niitsitapiisinni: Our Way of Life, a permenent exhibit centred around the Niitsitapi, features a number of items from the museum's Native North America collection.

Where Symbols Meet: A Celebration of West African Achievement, is a permanent exhibition at Glenbow, featuring a number of items from the museum's West African collection.

All content from Kiddle encyclopedia articles (including the article images and facts) can be freely used under Attribution-ShareAlike license, unless stated otherwise. Cite this article:
Glenbow Museum Facts for Kids. Kiddle Encyclopedia.