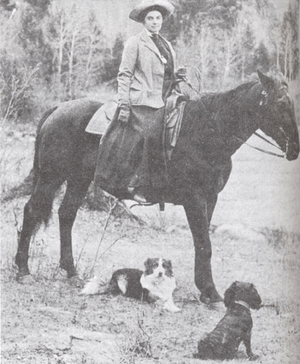 Emily Carr was born in Victoria, British Columbia in 1871. Her parents died while she was a young teenager. She began art lessons when she was sixteen. When she was nineteen, she went to study art in San Francisco. She also studied art in England but she got sick and came back to Victoria. After she got better, she went to France to continue her art studies. She saw paintings by many French artists who were experimenting with new ways of painting. She was most influenced by French impressionism and post-impressionism, though.

When Carr came back to Canada, she had trouble selling her paintings because they looked unusual to many people. Her paintings were even laughed at. She had to make money to support herself so she ran a small apartment house. She was so busy that she did not have much time to paint.

In 1927, she met a famous group of Canadian painters called the Group of Seven. They were impressed by her paintings and she became respected for her art.

In the later years of her life, Carr started writing books. Klee Wyck was the title of one of these books. It won the Governor General's Award which is an important award for literature in Canada. She also wrote The Book of Small. She died in 1945 in Victoria.

Carr painted scenes from nature and from First Nations culture. For example, she painted many Haida and Tlingit totem poles. The Tlingit people called her Klee Wyck, which means "the laughing one." She went on long trips by canoe to visit First Nations villages.

She also liked to paint Canadian nature. She believed it was important that Canadian paintings have a different style than paintings from Europe. She liked the paintings of the Group of Seven because of their originality.

All content from Kiddle encyclopedia articles (including the article images and facts) can be freely used under Attribution-ShareAlike license, unless stated otherwise. Cite this article:
Emily Carr Facts for Kids. Kiddle Encyclopedia.