The British Columbia Coast, popularly referred to as the BC Coast or simply the Coast, is a geographic region of the Canadian province of British Columbia. It is synonymous with being the West Coast of Canada, including the entire western continental coastline of Canada along the Pacific Ocean.

While the exact boundaries are variously defined, the region is generally defined to include the 15 regional districts that have coastline along the Pacific Ocean or Salish Sea, and are part of the Lower Mainland, a subregion of the British Columbia Coast. Other boundaries may exclude parts of or even entire regional districts, such as those of the aforementioned Lower Mainland.

Among locals, the British Columbia Coast can further be divided into seven major subregions:

Research from the 1990s has indicated that the Ice Age-era coastline of the British Columbia Coast was lower by about 100 metres (330 ft). The effect of the sea level on the coastline was such that Queen Charlotte Sound, which is between Haida Gwaii and the northern end of Vancouver Island, was a coastal plain, as were all the straits inland from it, except for those that were mountain valleys.

Underwater archaeology has shown the presence of permanent human habitations and other activity at the 100-metre (330 ft) contour, and the Ice Age existence of such a coastal plain has put a new light on Ice Age populations in North America as well as on the strong likelihood of this area having been the major migration route from (and perhaps to) Asia.

The heavy indentation and mild climate of the British Columbia Coast have led to inevitable comparisons with the geography's predisposition to encouraging increased human settlement and movement as well as cultural foment and population growth in the Aegean, the Irish Sea/Hebrides and in the Danish Archipelago and adjoining Scandinavian coasts.

The natural fecundity of the environment - rich in seafood, wild game, and greenery - combined with the ease of travel (by water) is seen in all cases (British Columbia, Denmark, Greece) to have generated a dynamic and gifted civilization. And there are comparisons to be made between the artistic and political and social level of the Pacific Northwest Peoples and those of pre-Conversion pagan Scandinavia, Ireland and Archaic-Era Greece.

The British Columbia Coast stretches from the southern tip of Vancouver Island along the Strait of Juan de Fuca to the community of Stewart at the head of Portland Canal. The aerial distance between these two points is approximately 954 km (593 mi). However, due to its deeply incised coastline and over 40,000 islands of varying sizes, the total length of the British Columbia Coast is over 25,725 kilometres (15,985 mi), or approximately 10% of the entire Canadian coastline. This coastal geography is shared with the neighbouring U.S. states of Alaska and Washington.

The dominant landforms are the Insular Mountains of Vancouver Island and Haida Gwaii, and the Coast Mountains that stretch along the entire length of the coast. The proximity of these mountains to the coast produce fjords that rival those of Norway in length and depth. Several large Islands fill the strait between Vancouver Island and the Mainland with Texada Island, Cortes Island and Salt Spring Island being the largest in size. Fjords of note include Burrard Inlet, Howe Sound, Jervis Inlet, Desolation Sound, Dean Channel, Douglas Channel, Prince Rupert Harbour, and Portland Inlet.

The BC Coast is dominated by a moderate oceanic climate (Köppen: Cfb) with warm summers, cool winters, and constant rainfall that peaks during the winter months. These areas enjoy the mildest winter weather in all of Canada, as temperatures seldom fall much below the freezing mark.

The southernmost region of the coast (surrounding the Salish Sea) features a warm-summer Mediterranean climate with warm, dry summers and cool, wet winters. This gradually transitions to a predominantly oceanic climate as you move north along the coast or further inland into the foothills of the Pacific Ranges. Higher elevations feature a subpolar oceanic climate (Köppen: Cfc) with cool summers, cold winters, and constant rainfall that peaks during the winter months. The highest elevations feature a subarctic climate (Köppen: Dfc). 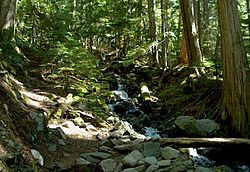 According to the ecozone system used by Environment and Climate Change Canada (ECCC), the BC Coast is part of four distinct ecozones: Pacific Coastal Mountains, Coastal Western Hemlock-Sitka Spruce Forests, Pacific and Nass Ranges, and Strait of Georgia/Puget Lowland.

According to the British Columbia Ministry of Forests, which uses an ecosystem classification system independent of the WWF and ECCC, the BC Coast is part of two distinct biogeoclimatic zones: Coastal Western Hemlock and Coastal Douglas-fir.

Below are the 15 regional districts of British Columbia defined as being in the Coast region: 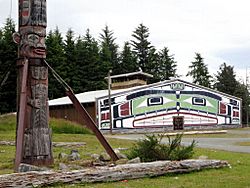 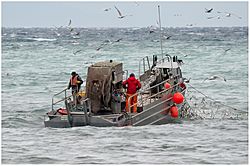 Trawling for herring in the Salish Sea

The fishery of the Pacific Northwest Coast is legendary, especially for its many salmon runs and the cultures that built on top of them throughout the region. Salmon runs have greatly diminished since pre-Contact years and the advent of commercial canning and, ultimately, depletion of stocks by high-seas fishing.

The Coast Region of B.C is connected to the rest of B.C by various roads depending on the region.

The populous Fraser Valley and Lower Mainland is linked to the rest of the province by Highway 1 (Fraser Canyon Highway), Highway 5 (Coquihalla Freeway), Highway 3 (Crowsnest Highway) and Highway 99 (Sea to Sky Highway). The Lower Mainland is also connected to the U.S by four highway border crossings with the Peace Arch on Interstate 5 being the largest. Several freeways connect lower mainland communities together.

The backbone of Vancouver Island's highway network is the Highway 19 which along with a portion of Highway 1 forms the Island Highway. The Island highway is a mix of 4-lane freeway, 4 lane arterial highway and 2 lane highway running roughly along the east shore of Vancouver Island. Access to the west coast of Vancouver Island can be accomplished by crossing mountain passes on Highway 4 to Tofino and Highway 23 to Gold River. Thousands of other roads ranging from small freeways near Victoria to logging roads exist all over the Island.

Although the Sunshine Coast is on the mainland it is connected to the highway network only by ferries. It has one route which is Highway 101, a narrow curvy 2 lane road split in two by a ferry crossing. Texada Island, a large island off the Sunshine Coast and has its own network of highway standard roads although they are unnumbered.

Owing to the challenging topography of the British Columbia Coast, there is no north–south highway linking the coastal communities of the province between Port Hardy and Kitimat. Instead, travellers utilize one of the coastal ferry lines operated by BC Ferries. The exceptions are Bella Coola is accessible by a long largely gravel Highway 20 from the B.C interior over a high pass; and the towns of Terrace, Prince Rupert and Kitimat which is assessed from the B.C. interior on Highway 16.

Haida Gwaii has a extension of Highway 16 on it, one of Haida Gwaii's few paved roads. 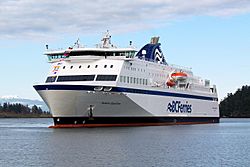 The sheltered waterways of the British Columbia Coast form part of the Inside Passage, a coastal maritime route along which vessels navigate to avoid the rough waters and bad weather of the open North Pacific. As such, the maritime route is heavily trafficked by cruise ships, cargo ships, ferries, and other marine vessels.

BC Ferries, an independently managed publicly-owned company, operates scheduled daily crossings between major population centres throughout the British Columbia Coast. Dozens of smaller ferries ply lesser routes within and between these regions. The Alaska Marine Highway also operates nonstop ferry service through the British Columbia Coast along its Bellingham-Ketchikan route.

The Port of Vancouver is the largest commercial shipping port in Canada and along the entire Pacific coast of North America by metric tons, which handles a total cargo volume of 76.5 million metric tons. By the same metric, the Port of Vancouver is also the fifth largest commercial shipping port in North America.

All content from Kiddle encyclopedia articles (including the article images and facts) can be freely used under Attribution-ShareAlike license, unless stated otherwise. Cite this article:
British Columbia Coast Facts for Kids. Kiddle Encyclopedia.