Desolation Sound (French: Baie Desolation) is a deep water sound at the northern end of the Salish Sea and of the Sunshine Coast in British Columbia, Canada.

Desolation Sound was inhabited by tribes of the K'ómoks prior to the arrival of Europeans and falls within the traditional territories of the Klahoose First Nation, Tla'amin Nation, and Hamalco First Nations. In the summer of 1792, two expeditions led by Captains George Vancouver, Dionisio Alcalá Galiano and Cayetano Valdés y Flores arrived and cooperated in mapping the sound. Vancouver named it Desolation Sound, cryptically claiming that "there was not a single prospect that was pleasing to the eye".

Refuge Cove is the only community in Desolation Sound. It is located on West Redonda Island and administered within Strathcona Regional District. The community serves as a centrally located supply stop for boaters and local fishers travelling in or near Desolation Sound.

The major industries of Desolation Sound include shellfish farming, forestry, and ecotourism.

Visitors travelling by car to Desolation Sound can take BC Ferries from Vancouver or Courtenay to Powell River, and drive the short distance northward to Lund. By boat or kayak from Lund, 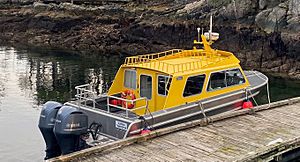 All content from Kiddle encyclopedia articles (including the article images and facts) can be freely used under Attribution-ShareAlike license, unless stated otherwise. Cite this article:
Desolation Sound Facts for Kids. Kiddle Encyclopedia.