Kids Encyclopedia Facts
This page is about the archipelago near Campbell River, B.C.. For other islands with a similar name, see Discovery Island (disambiguation).

The Discovery Islands are a group of islands located at the northern end of the Salish Sea and the eastern end of Johnstone Strait, between Vancouver Island and the mainland coast of British Columbia, Canada.

Most of these islands have very few residents. Only Quadra Island and Cortes Island have ferry service. The remainder are served by private boat or float plane.

The complex geography of the area can make it difficult to determine when travelling by boat if a sighted coastline belongs to the mainland, Vancouver Island, or one of the Discovery Islands. 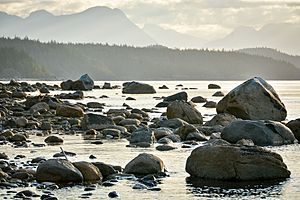 The Discovery Passage starts where the Strait of Georgia narrows between Quadra Island and Vancouver Island and continues north to Chatham Point, where it meets the Nodales Channel and Johnstone Strait.

The primary attraction for visitors are salmon fishing, sailing, kayaking, and hiking.

All content from Kiddle encyclopedia articles (including the article images and facts) can be freely used under Attribution-ShareAlike license, unless stated otherwise. Cite this article:
Discovery Islands Facts for Kids. Kiddle Encyclopedia.