The City of North Vancouver is a waterfront municipality on the north shore of Burrard Inlet, directly across from Vancouver, British Columbia. It is the smallest in area of the three North Shore municipalities and the most urbanized as well. Although it has significant industry of its own – including shipping, chemical production, and film production – the city is usually considered to be a suburb of Vancouver. The city is served by the Royal Canadian Mounted Police, British Columbia Ambulance Service, and the North Vancouver City Fire Department. 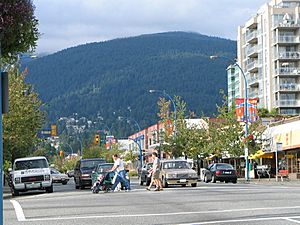 Main thoroughfare Lonsdale Avenue with Mount Fromme in the background

The City of North Vancouver is relatively densely populated with a number of residential high-rise buildings in the Central Lonsdale and Lower Lonsdale areas.

The city has much in common with the District Municipality of North Vancouver and West Vancouver. Together these three municipalities are commonly referred to as the North Shore. The differences between the two "North Vans" are most apparent to their residents. Other Lower Mainland residents are seldom aware of the difference between the two and refer to both as "North Vancouver".

Moodyville (at the south end of Moody Avenue, now Moodyville Park), is the oldest settlement on Burrard Inlet, predating Vancouver; only New Westminster is the older non-native settlement in the region. Logging came to the virgin forests of Douglas Fir in North Vancouver, as sailing ships called in to load. A water-powered sawmill was set up in the 1860s at Moodyville, by Sewell Moody. Subsequently, post offices, schools and a village sprang up. In time, the municipality of North Vancouver (which encompassed the entire North Shore from Deep Cove to Dundarave) was incorporated. In the 1880s, Arthur Heywood-Lonsdale and a relation James Pemberton Fell, made substantial investments in North Vancouver and in 1882 he financed the Moodyville investments. Several locations in the North Vancouver area are named after Lonsdale and his family. The financial collapses of the 1890s and 1907 aggrieved the young city into bankruptcy. As a result of this, the separate areas of West Vancouver, and District of North Vancouver came into being, with the city holding on to only a small portion of its former area. 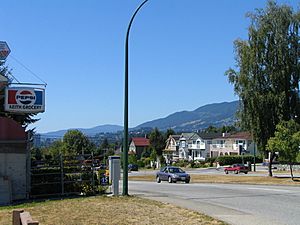 Keith Road looking west, with Hollyburn Mtn in the distance

Part of the reason was the cost of developing raw mountainous terrain. And, originally the ocean foreshore was primarily swamp. The great distances, and large rivers to span, hindered development. Bridges were built, only to have them washed out in a few years from winter floods. The city and district built Keith Road in 1912, which undulated from West Vancouver to Deep Cove amid the slashed sidehills, swamps, and burnt stumps.

Yet the city did gain a strong foothold, with Lonsdale Avenue. Serviced by the North Vancouver Ferries, it proved a popular area. Commuters used the ferries to work in Vancouver. Street cars and early land speculation, spurred interest in the area. Streets, city blocks and houses were slowly built around lower Lonsdale. Wallace Shipyards, and the Pacific Great Eastern Railway provided an industrial base, although, the late arrival of the Second Narrows railway bridge in 1925 controlled development. 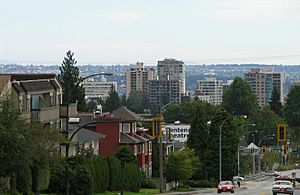 City of North Vancouver as seen from Upper Lonsdale

Sawmills, logging, and small farms continued in the interwar years. Yet the nearby mountains also proved to be a permanent attraction. Ski areas were set up on Grouse Mountain and Mount Seymour.

The North Vancouver mountains have many drainages: Capilano, MacKay, Mosquito, Lynn, and Seymour Rivers. The Depression again bankrupted the city, while the Second World War turned North Vancouver into the Clydeside of Canada with a large shipbuilding program. Housing the shipyard workers, provided a new building boom, which continued on through the Post-war years. By that time, North Vancouver became a popular housing area.

Sites of interest in the city include: 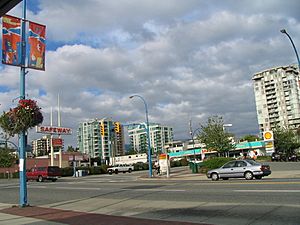 The City of North Vancouver is connected to Vancouver by two highway bridges; the Lions' Gate Bridge and the Ironworkers Memorial Second Narrows Crossing, and also by a passenger only ferry, the SeaBus. This system as well as the bus system in North Vancouver is operated by Coast Mountain Bus Company, an operating company of Translink. The hub of the bus system is Lonsdale Quay, location of the SeaBus terminal.

The main street in the city is Lonsdale Avenue, which begins at Lonsdale Quay and goes north to 29th Street where it continues in the District of North Vancouver, ending at Rockland Road.

According to the 2001 Statistics Canada Census:

Population estimates according to BC Stats:

Mother Languages as reported by each person: Source:

The Conseil scolaire francophone de la Colombie-Britannique operates one Francophone school in that city: école André-Piolat, which has both primary and secondary levels.

There are also several independent private elementary and high schools in the area, including Bodwell High School and Lions Gate Christian Academy.

Post-secondary education is available at Capilano University in the district, as well as at Simon Fraser University and the University of British Columbia in neighbouring communities.

All content from Kiddle encyclopedia articles (including the article images and facts) can be freely used under Attribution-ShareAlike license, unless stated otherwise. Cite this article:
North Vancouver (city) Facts for Kids. Kiddle Encyclopedia.