Burrard Inlet (French: Baie Burrard) is a relatively shallow-sided coastal fjord in southwestern British Columbia, Canada. Formed during the last Ice Age, it separates the City of Vancouver and the rest of the low-lying Burrard Peninsula (to the south) from the slopes of the North Shore Mountains, home to the communities of West Vancouver and the City and District of North Vancouver.

What is now known as Burrard Inlet has been home to the Indigenous peoples of the Musqueam, Squamish people and Tsleil-waututh, who have resided in this territory for thousands of years. In 1791, the first European explorers in the region, Juan Carrasco and José María Narváez, sailing under orders of Francisco de Eliza, entered the western part of the inlet in their ship, the Santa Saturnina. They failed to find the Fraser River, mistaking the lowland of the river's delta as a major inlet of the sea, which they named Canal de Floridablanca. This led to one of the prime objectives of the 1792 expedition of Dionisio Alcalá Galiano, which was to determine the exact nature of the Canal de Floridablanca. Galiano spent many days exploring the general area, realizing that there was a great river there and sighting Burrard Inlet itself on June 19, 1792. Just days later, the inlet was again named by Captain George Vancouver, after his friend and former shipmate Captain (later Admiral) Sir Harry Burrard.

In 1888, the inlet was described in The British Columbia Pilot published by the British Admiralty as follows.

Burrard inlet differs from most of the great sounds of this coast in being comparatively easy of access to steam vessels of any size or class, and in the convenient depth of water for anchorage which may be found in almost every part of it; its close proximity to Fraser river, with the great facilities for constructing roads between the two places, and its having become the terminus of the Pacific and Canadian Railway, likewise add considerably to its importance. It is divided into three distinct harbours, viz., English bay or the outer anchorage; Vancouver (formerly called Coal harbour), above the First Narrows; and Port Moody at the head of the eastern arm of the inlet.

The inlet runs almost directly east from the Strait of Georgia to Port Moody. About two-thirds of the way east from the mouth of the inlet, the steep-sided Indian Arm branches off to the north between Belcarra and Deep Cove on into the Pacific Ranges.

Near the mouth of the inlet, a small section of the inlet along the curved stretch of the Burrard Peninsula is named English Bay. From English Bay, a small inlet named False Creek branches off to the east and incises the peninsula.

The extent of Burrard Inlet is defined as a line between Point Atkinson and Point Grey on the west, the end of Port Moody Arm on the east, and the head of Indian Arm on the north. The inlet is about 31 kilometres (19 mi) long from the Strait of Georgia to Port Moody, or about 44 kilometres (27 mi) from the Strait of Georgia to the head of Indian Arm.

Settlements on the shores of Burrard Inlet include Vancouver, West Vancouver, North Vancouver, Burnaby, and Port Moody. Three bridges, the First Narrows Bridge (alias Lions Gate Bridge) (built in the 1930s), the Ironworkers Memorial Second Narrows Crossing (1960) and the CNR railway bridge (1969) at the Second Narrows, and the SeaBus passenger ferry, cross the inlet. Aside from just east of the inlet's mouth (where it includes English Bay), it is widest (about 3 km or 1.9 mi) between the First and Second Narrows, also the busiest part of Vancouver's port. 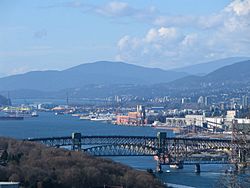 Protected from the open ocean, the calm waters of Burrard Inlet form Vancouver's primary port area, an excellent one for large ocean-going ships. While some of the shoreline is residential and commercial, much is port-industrial, including railyards, terminals for container and bulk cargo ships, grain elevators, and (towards the eastern end) oil refineries. Freighters waiting to load or discharge cargoes in the inlet often anchor in English Bay, which lies south of the mouth of the inlet and is separated from it by Vancouver's downtown peninsula and Stanley Park.

On the main inlet, a few park areas remain forested as they were centuries ago, but the steep slopes of Indian Arm are so impassable that most have seen no development, despite the proximity of such a major city. Only in 2003 was a rough wilderness hiking trail around the whole of Indian Arm completed, and it was the work of one man over many years.

The major crossings of Burrard Inlet, from west to east, are as follows:

All content from Kiddle encyclopedia articles (including the article images and facts) can be freely used under Attribution-ShareAlike license, unless stated otherwise. Cite this article:
Burrard Inlet Facts for Kids. Kiddle Encyclopedia.