Highway 101, which first opened in 1962, is divided into two separate land segments, with a ferry link in between. The highway is maintained by Capilano Highway Services. Despite its location on the mainland, the highway is unique for not being connected to the rest of the British Columbia highway system. Access to the highway can only be obtained by taking ferries from Horseshoe Bay to the south end in Gibsons or Comox to Powell River. Highway 101 between Langdale and Powell River is designated as a feeder route of the Canadian National Highway System.

The total distance of Highway 101, including the ferry link, is approximately 156 kilometres (97 mi). The highway begins in the south at the BC Ferries terminal at Langdale, which connects the Sunshine Coast to Vancouver via a ferry route across Howe Sound to Horseshoe Bay. The southern land section of Highway 101 is 80 kilometres (50 mi) long, and includes from south to north, the communities of Gibsons, Roberts Creek, Sechelt, Halfmoon Bay and Pender Harbour. The ferry link across the Jervis Inlet lasts 9.5 nautical miles (17.6 km) between Earls Cove to the south and Saltery Bay to the north. The 59-kilometre-long (37 mi) northern land section of Highway 101 includes, from southeast to northwest, the hamlets of Stillwater and Lang Bay, the city of Powell River, and the community of Lund, at the northern terminus of the highway.

Several ideas to connect the Sunshine Coast and Highway 101 to the rest of British Columbia via a road or bridge connection have been considered and undergone feasibility studies. Bridging the ferry gap between the two sections of Highway 101 was studied at the same time. A fixed link would improve travel times and reliability for residents, lower operating costs, open the area up for tourism and add real estate. Over a dozen fixed link ideas were originally proposed which was narrowed down to 4 for serious consideration. One or a combinations of ideas are considered for implementation.

- A 58km extension of Highway 101 to travel along the west shore of Howe Sound and connect to Highway 99 near Squamish creating a ferry-free roundabout route from Vancouver to Gibsons.

- A 22km extension of Highway 101 that would travel across Howe Sound on a pair of 1.5km long suspension bridges, with Anvil Island in-between. It would then connect to Highway 99 north of Lions Bay. This would also create a ferry-free route from Vancouver to Gibsons, and it would be much shorter and more direct than the route than the 58km connection to Squamish. However, it is opposed by the Islands Trust.

- A new 200km long highway that links to Powell River to Squamish. This new highway would provide Highway 101 with a link to the mainland highway system by crossing the Coast Mountains. Two tunnels, 8km and 4.5km in length would be required. This route is noted to also allow access to a remote area including Jervis inlet, provided opportunities for new tourist and recreation area uses. In will also open the area up for resource exploration and slash shipping costs to Powell River. This route had been popular amongst residents and business of the Powell River area. However this route would not connect Gibsons, resulting in the ferry access still being necessary to access the south section of the highway.

- A 19km long highway link between the two sections of Highway 101 eliminating the ferry between Saltery Bay and Earls Cove. This route would require a pair of suspension bridges, 0.7 and 2.0 kilometres in length. A large portion of highway would be on Nelson Island between the two bridges. Nelson island despite being large, is currently not serviced by ferry and contains a minimal population. This route would allow the island to be opened for development.

All four options were considered feasible with a price range of 2 to 5 billion depending on the option. Analysis deemed that the two bridges had positive cost to benefit ratios while the two road links had negative cost to benefit ratios. Especially poor was the Squamish-Gibsons road link due to the fact it would take a hour longer to drive than the existing ferry takes. Tolls were considered, but low traffic volumes on every option except the Gibsons Bridge (#2) causes minimal cost compensation. The study is inconclusive, meaning that all four options are still on the table waiting further analysis. 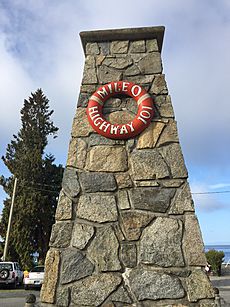 Milestone marker in Lund designating a terminus of the highway.

From south to north:

All content from Kiddle encyclopedia articles (including the article images and facts) can be freely used under Attribution-ShareAlike license, unless stated otherwise. Cite this article:
British Columbia Highway 101 Facts for Kids. Kiddle Encyclopedia.