The WWF defines the ecoregion as the mainland coast of British Columbia up to 150 km inland to the crest of the Coast Mountains, extending along the western front of the northern Cascade Range in northwestern Washington. Specific areas include the Pacific and Kitimat Ranges of the Coast Mountains, the Nass Ranges and the basin of the Nass River. An exclave of the ecoregion occupies the eastern slope of the Olympic Mountains on Washington's Olympic Peninsula. The landscape is a mixture of coastal lowland with many steep valleys, inlets, and fjords. The climate is drier on the inland mountains than right on the coast and the average annual temperature in the valleys is 6.5 °C. 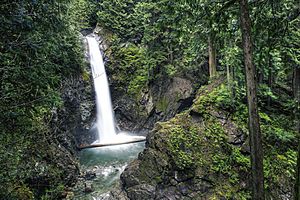 All content from Kiddle encyclopedia articles (including the article images and facts) can be freely used under Attribution-ShareAlike license, unless stated otherwise. Cite this article:
British Columbia mainland coastal forests Facts for Kids. Kiddle Encyclopedia.