Garibaldi Provincial Park, also called Garibaldi Park, is a wilderness park located on the coastal mainland of British Columbia, Canada, located 70 kilometres (43.5 mi) north of Vancouver. It was established in 1920 and named a Class A Provincial Park of British Columbia in 1927. The park is a popular destination for outdoor recreation, with over 30,000 overnight campers and over 106,000 day users in the 2017/2018 season.

Garibaldi Park spans an area of over 1,950 square kilometres (753 sq mi), encompassing a majority of the Garibaldi Range mountains. The western side of the park is highly trafficked by the public due to the nearby Sea to Sky Highway providing access to destinations such as Elfin Lakes, Garibaldi Lake, The Black Tusk, Cheakamus Lake, and Wedgemount Lake. The eastern wilderness of the park is harder to access and therefore much more remote than its western counterpart. To the south, Garibaldi Park connects with Golden Ears Provincial Park and Pinecone Burke Provincial Park, while its northern sections stretch past Whistler and end just south of the village of Pemberton.

Prior to the arrival of Europeans in the area, Mount Garibaldi was referred to by the Squamish people as Nch'kay, meaning "Dirty Place" or "Grimy One" in reference to the muddy water of the Cheekye River. The mountain was an important cultural landmark for the Squamish, with its surrounding area being used for hunting, foraging, and the collection of obsidian. In Squamish mythology, Nch'kay was the peak to which the people tied their canoes to avoid being swept away by the Great Flood.

Another culturally significant peak within the park is The Black Tusk, which was known to the Squamish people as t'ak't'ak mu'yin tl'a in7in'a'xe7en. The name translates to "Landing Place of the Thunderbird", as the peak was said to have been crushed into its present shape by the talons of the in7in'a'xe7en, or Thunderbird. To the Lil'wat people, the same peak was known as Q'elqámtensa ti Skenknápa, or "Place Where the Thunder Rests". 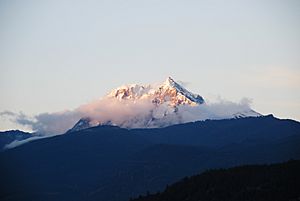 Mount Garibaldi's south face, as seen from Squamish. This is the view George Henry Richards had when he named the peak during the survey in Howe Sound. Garibaldi Park takes its name from this peak.

Garibaldi Provincial Park received its modern name from Mount Garibaldi, which was itself named after Giuseppe Garibaldi by Captain George Henry Richards during a survey of Howe Sound in 1860. 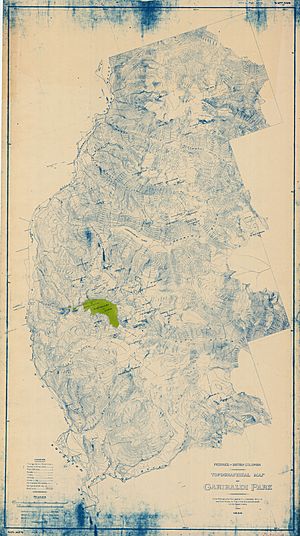 In 1907, the first ascent of Mount Garibaldi was completed by Vancouver mountaineers A. Dalton, W. Dalton, A. King, T. Pattison, J. J. Trorey, and G. Warren. The views from the peaks inspired the establishment of summer climbing camps at Garibaldi Lake, which included among their ranks many members of the newly-formed British Columbia Mountaineering Club. The first of these camps resulted in the naming and first ascent of The Black Tusk, by a party led by William J. Gray in 1912. The interest sparked by the camps eventually led to the park being legislated as a park reserve in 1920, and designated as a Class A Provincial park in 1927.

In 1967, the southern section of Garibaldi Provincial park was split off as Golden Ears Provincial Park, which juts southward between the basins of Pitt Lake and the Stave River into the Municipality of Maple Ridge.

The park's landscape consists of many steep rugged mountains, coastal forests, and alpine lakes. Much of this landscape was shaped by quaternary continental and alpine glaciation, as well as volcanic activity such as the eruption of Mount Garibaldi some 13,000 years ago.

The Black Tusk, as seen from the trail to Panorama Ridge.

There are over 150 glaciers in the park, including the Garibaldi Névé and Mamquam icefields. The highest peak in Garibaldi Park is Wedge Mountain, at an elevation of 2,891 metres (9,485 ft). It also includes volcanic features such as an andesite tuya known as The Table, a cinder cone known as the Opal Cone, and the stratovolcanoes Mount Garibaldi and The Black Tusk, which are part of the Garibaldi Volcanic Belt.

There are a number of alpine lakes in the park, including Garibaldi Lake, Cheakamus Lake, Mamquam Lake, Elfin Lakes, and many other smaller lakes. The park is also the origin of the Pitt River, a tributary of the Fraser River.

Garibaldi Lake is retained by a lava dam known as The Barrier. Sometime in the fall or winter of 1855–56, part of this dam gave away, which resulted in a 25,000,000 cubic meter landslide that devastated the area below. The instability of the barrier was brought to public attention in the 1970s, eventually leading to the area below The Barrier being declared unsafe for habitation in 1981. The village of Garibaldi was evacuated as a result of this. 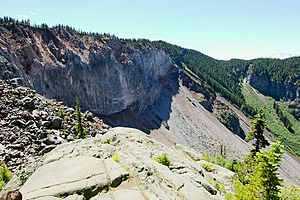 View of The Barrier, which was declared unstable in 1981 and resulted in the evacuation of the village of Garibaldi.

Today, the land immediately below The Barrier is referred to as the Barrier Civil Defence Zone by BC Parks. The area around it is denoted by signage warning hikers not to camp, stop, or linger within the hazard zone.

In 2007, a study on glacial recession in Garibaldi Park was conducted by the Department of Earth Sciences at Simon Fraser University. This study determined that, by 2005, glacier coverage in the park had decreased to 49% of what it was in the early 18th century. The study attributed this decrease to the trend of global temperature change in the 20th century.

A similar study in 2013 by the same authors reinforced that the park's glaciers, along with others in western Canada, are at the smallest they have been in several thousand years.

Garibaldi's vegetation is altitudinally zoned. The lower slopes of the park, between 1,000 and 1,700 metres (3,300 and 5,600 ft) above sea level, are dominated by dense forests of douglas-fir, western red cedar and western-hemlock. Forests of mountain hemlock, yellow cedar, alpine fir, and white bark pine are present in the higher elevations, and these eventually give way to parkland featuring the characteristically stunted trees of subalpine climates. 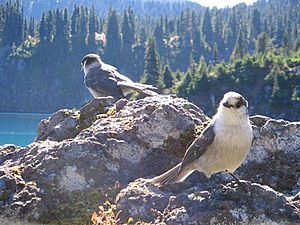 Canada jays, known colloquially as Whisky Jacks, are a common sight in many of the higher slopes in the region.

Much of the park resides in the alpine and subalpine zones, and the park's alpine meadows are carpeted by many species of alpine plants, including heather, western anemone, lupine, arnica, Indian paintbrush, and avalanche lily. The park's flowers are typically most prominent in August.

Wildlife thrives in Garibaldi Park, including mammals such as grizzly and black bears, mountain goat, deer, marmot, and pika. A number of birds are present in the park, including golden eagle, bald eagle, blue jay, whiskey jack, and ptarmigan.

As part of the park's 1990 management plan, an assessment was done on the park's mountain goat population in the Spearhead area, which at the time numbered from 50 to 70 individuals. The goal, supported by the provincial conservation framework of BC, was to maintain healthy, viable populations of the animal, thus preventing it from entering "at risk" status. Monitoring flights in March 2012 and March 2013 determined this population was "relatively stable and healthy", but as this was limited to the Spearhead area, no determination of the status of mountain goats throughout the park was made.

Garibaldi Provincial Park is an outdoor recreation destination, featuring many kilometres of hiking trails, campgrounds, and winter camping facilities. In 2016, the park was receiving enough traffic to prompt the province to require advance online bookings for all overnight stays. Prior to this change, campers wishing to stay overnight could register on the day of their arrival in the park. This made Garibaldi Park the third BC provincial park to implement this requirement (the others being Bowron Lake Provincial Park and Berg Lake in Mount Robson Provincial Park).

While the most popular activities in the park are hiking and backcountry camping, other activities include fishing, swimming, canoeing/kayaking, rock climbing, mountaineering, mountain biking, and backcountry skiing. All of the access points, and most of the man-made facilities, are located on the west side of the park, while the eastern wilderness of the park is more remote and less frequented by humans. 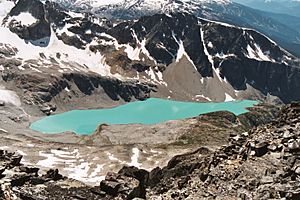 The park has five main access points, all accessed from the Sea to Sky Highway. Each connects to a specific region of the park, though it is possible to access multiple regions from some access points by following the park's interconnected trails. 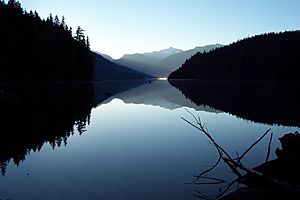 There are four overnight-use shelters in the park: 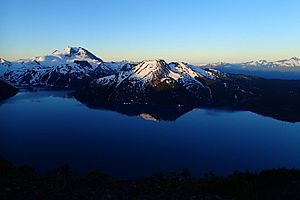 Garibaldi Lake as seen from Panorama Ridge at dawn. Mount Garibaldi's north face, as well as The Table are visible on the upper left.

The park features over 90 kilometres (56 mi) of park-maintained trails, accessible year-round, although winter hiking requires use of snowshoes or skis. Some of the common routes include:

Panorama of the Elfin Lakes

All content from Kiddle encyclopedia articles (including the article images and facts) can be freely used under Attribution-ShareAlike license, unless stated otherwise. Cite this article:
Garibaldi Provincial Park Facts for Kids. Kiddle Encyclopedia.