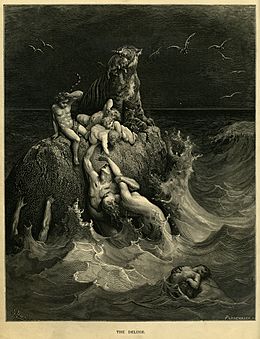 "The Deluge", frontispiece to Gustave Doré's illustrated edition of the Bible. Based on the story of Noah's Ark, this shows humans and a tiger doomed by the flood futilely attempting to save their children and cubs.

A Deluge myth or Flood myth is a mythical story about a flood. Usually this flood is sent by a deity to destroy a civilisation as a punishment. The theme can be found in many cultures. Well-known examples that are believed to be myths include the story of Noah's Ark in the Bible, the Hindu Puranic story of Manu, Deucalion in Greek mythology or Utnapishtim in the Epic of Gilgamesh.

All content from Kiddle encyclopedia articles (including the article images and facts) can be freely used under Attribution-ShareAlike license, unless stated otherwise. Cite this article:
Deluge myth Facts for Kids. Kiddle Encyclopedia.