Cheakamus Lake is a lake in Garibaldi Provincial Park on the southeastern outskirts of the resort municipality of Whistler, British Columbia. It has an area of 5.7 km2 (2.2 mi2). It is an expansion of the upper Cheakamus River, with the river entering it at its east end and exiting at the west end.

In 2005, 40,000 litres of sodium hydroxide were spilled into the Cheakamus River, well downstream of the lake, as a result of a CN train derailment. 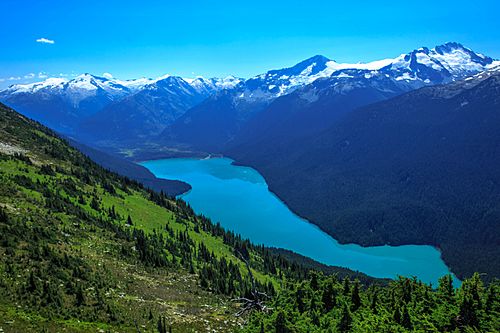 All content from Kiddle encyclopedia articles (including the article images and facts) can be freely used under Attribution-ShareAlike license, unless stated otherwise. Cite this article:
Cheakamus Lake Facts for Kids. Kiddle Encyclopedia.