Kids Encyclopedia Facts
This page is about the island in British Columbia. For the island in Nunavut Territory, see Princess Royal Island (Nunavut).

The island is located in an extremely remote area of British Columbia, 520 kilometres (320 mi) north of Vancouver and 200 kilometres (120 mi) south of Prince Rupert. It is accessible only by boat or air. The Inside Passage ferry and shipping lane runs along its eastern flank, in Princess Royal Channel separating it from the mainland. The island is uninhabited, but used to be home to the community of Surf Inlet, a gold-mining town at the inlet of the same name (though also known as Port Belmont or Belmont), and Butedale, a mining, cannery, fishing and logging town on the island's east coast. The nearest communities today are Klemtu, on Swindle Island and Hartley Bay, on the mainland shore east of Gil Island.

Indian reserves on or adjacent to Princess Royal Island are:

Twelve of the 17 crew of U.S. Air Force 44-92075 were found alive here in 1950, during the first lost nuclear/Broken Arrow episode of the Cold War. The plane itself flew north after the crew bailed out, crashing on Mount Kologet, east of the Nass River to the northwest of Hazelton. 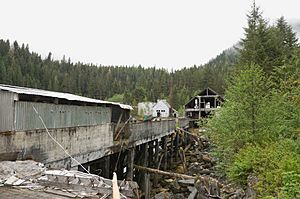 The island's northern tip is Trivett Point, its northwestern tip is Kingcome Point.

The Canoona River drains the central part of the island, flowing east to the sea from Canoona Lake.

The island is classified by the World Wildlife Fund as part of their system's Pacific temperate rain forest ecoregion. In the ecoregion system used by Environment Canada, the island is in the Pacific Maritime Ecozone. In the system of biogeoclimatic zones used by the British Columbia Ministry of Forests, the island is part of the Coastal Western Hemlock zone.

All content from Kiddle encyclopedia articles (including the article images and facts) can be freely used under Attribution-ShareAlike license, unless stated otherwise. Cite this article:
Princess Royal Island Facts for Kids. Kiddle Encyclopedia.