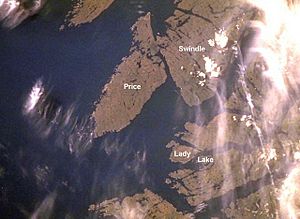 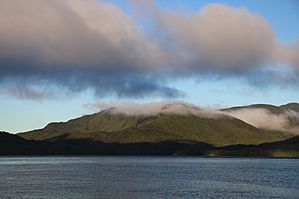 Swindle Island is an island on the North Coast of the Canadian province of British Columbia. It is located south of Princess Royal Island on the Inside Passage shipping route. The small First Nations community of Klemtu is located on its eastern side across from Cone Island. Price Island lies just south of Swindle Island. Both are located within the Kitimat-Stikine Regional District. Swindle Island's southernmost extremity is Jorkins Point, which lies at the confluence of Milbanke Sound and Finlayson Channel.

All content from Kiddle encyclopedia articles (including the article images and facts) can be freely used under Attribution-ShareAlike license, unless stated otherwise. Cite this article:
Swindle Island Facts for Kids. Kiddle Encyclopedia.