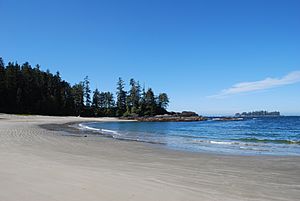 Temperate rain forests, such as this in British Columbia's Vancouver Island, often grow right up to the shoreline.

This ecoregion is a subregion of the Cascadia bioregion.

The forests in the north contain predominantly Sitka spruce and western hemlock, while those in the coastal forests are home as well to coast redwood (Sequoia sempervirens), coast Douglas-fir (Pseudotsuga menziesii), western redcedar and shore pine. Notably, many of the world's largest and tallest tree species are found in this ecoregion. Dense growths of epiphytes and mosses cover the trees, and lush vegetation is present everywhere.

Hardwood trees such as the bigleaf maple and the alder are also common, especially at lower elevations and along stream banks, and are vital to the ecosystem, in part because of their nitrogen fixing. 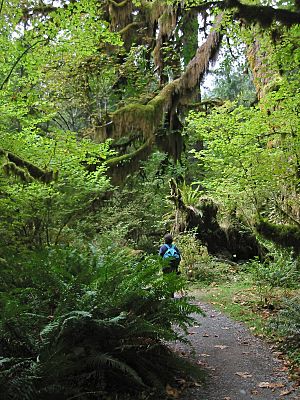 Dense growths of epiphytes and mosses cover the trees, and the understory vegetation is lush.

About 200 million years ago (during the Triassic and Jurassic periods), the landscape was dominated by conifers, which were the most diverse group of trees and constituted the greatest majority of large trees. When flowering plants emerged (in the following Cretaceous period), they quickly prevailed, causing most conifers to become extinct, and those that survived to adapt to harsh conditions. Perhaps the most significant difference in this change is that the primitive conifers invested their energy in the basic food supply for every seed, with no certainty of fertilization; by contrast, flowering plants create the food supply for a seed only after it is triggered by fertilization. The Pacific temperate rain forest now remains the only region on Earth of noteworthy size and significance where, due to unique climatic conditions, the conifers flourish as they did before being displaced by flowering plants. The northern Pacific temperate rain forests are relatively young, emerging in the past few thousand years following the retreat of the ice sheets of the last ice age. 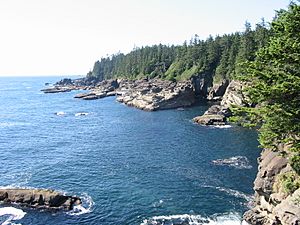 A view of the West Coast Trail, one of the three regions of Pacific Rim National Park Reserve

The ecosystem of Pacific temperate rain forests is so productive that the biomass on the best sites is at least four times greater than that of any comparable area in the tropics. In sheer mass of living and decaying material - trees, mosses, shrubs, and soil - these forests are more massive than any other ecosystem on the planet. In part, this is due to the rarity of fire. Unlike drier forests, which burn periodically, temperate rain forests are naturally subject to only small-scale disturbances, such as blow-downs and avalanches.

This rain forest spans a wide range of latitude - from about 40 degrees north to about 60 degrees north. The differences in climate from south to north create several major forest zones, characterized by different species.

The first survey to systematically explore the forest canopy in the Carmanah Valley of Vancouver Island yielded 15,000 new species, a third of all invertebrates known to exist in all of Canada. Among the collection were 500 species previously unknown to science.

The rain forest exists in a complicated landscape of islands and fjords, and many species depend on both the forest and the ocean. Salmon are one of the primary species of the rainforest, spawning in the forest streams. The marbled murrelet nests in old growth trees at night, but feeds in the ocean during the day.

Many of the most iconic photos of these forests include a large bear somewhere in the frame. Grizzly bears and black bears once thrived throughout the rain forest zone and beyond. Black bears can still be found throughout the forest's range, while grizzlies are largely confined to areas north of the Canada–US border. These forests have some of the largest concentrations of grizzly bears in the world, mainly due to the region's rich salmon streams. The Great Bear Rainforest in Canada is home to the rare white variant of the black bear known as the Kermode bear, also known colloquially as the "spirit bear." The endangered spotted owl was at the center of logging controversies in Oregon and Washington. Other wildlife species of note include the bald eagle, marbled murrelet, wolf, and sitka deer.

Pacific temperate rain forests have been subject to ongoing large-scale industrial logging since the end of World War II, cutting over half of their total area. In California, only 4% of the redwoods have been protected. In Oregon and Washington, less than 10% of the original coastal rain forest area remains.

An even larger percentage of the productive forest has been logged. Much of the land is rock, ice, muskeg, or less productive forest on steep slopes. The stereotypical old growth is limited to lowland flats and valleys, which have been preferentially targeted for logging. Historically, the most common protocol has been to place protected areas in the mountains, leaving the valleys to the timber industry. So while some very large areas are protected as parks and monuments, very little of the highest-value habitat has been protected, and much of it has already been cut.

In the Tongass National Forest, in the 1950s, in part to aid in Japanese recovery from World War II, the US Forest Service set up long term contracts with two pulp mills: the Ketchikan Pulp Company (KPC) and the Alaska Pulp Company (APC). These contracts were for 50 years, and divided up the forest into areas slated for APC logs and areas slated for KPC logs. These two companies conspired to drive log prices down, conspired to drive smaller logging operations out of business, and were major and recalcitrant polluters of their local areas. These long term contracts guaranteed low prices to the pulp companies — in some cases resulting in trees being given away for less than the price of a hamburger. Since 1980, the US Forest Service has lost over a billion dollars in Tongass timber sales.

Half a million acres (2,000 km2) of the Tongass was selected by native corporations under the 1971 Alaska Native Claims Settlement Act. Much of this area has been clearcut.

The most controversial timber sales in the Tongass are in the roadless areas. In September 2006, a landmark court decision overturned President George W. Bush's repeal of the Roadless Rule, reverting to the 2001 roadless area protections established under President Clinton. However, the Tongass was exempted from that ruling and it is unclear what the fate of its vast roadless areas will be.

All content from Kiddle encyclopedia articles (including the article images and facts) can be freely used under Attribution-ShareAlike license, unless stated otherwise. Cite this article:
Pacific temperate rainforests Facts for Kids. Kiddle Encyclopedia.