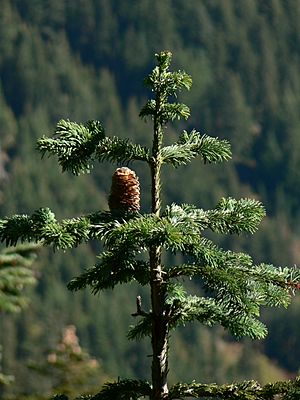 Abies amabilis, commonly known as the Pacific silver fir, is a fir native to the Pacific Northwest of North America, occurring in the Pacific Coast Ranges and the Cascade Range from the extreme southeast of Alaska, through western British Columbia, Washington and Oregon, to the extreme northwest of California. It is also commonly referred to as the white fir, red fir, lovely fir, Amabilis fir, Cascades fir, or silver fir. It grows from sea level to 1,500 metres (4,900 ft) in the north of the range, and 1,000–2,300 m (3,300–7,500 ft) in the south of the range, always in temperate rain forest with relatively high precipitation and cool, humid summers. Common associate trees are western hemlock in northern ranges, Douglas fir in central areas, and in the extreme southern area of its range, California buckeye.

It is a large evergreen coniferous tree growing to 30–45 m (98–148 ft), exceptionally 72 m (236 ft) tall, and with a trunk diameter of up to 1.2 m (3 ft 11 in), exceptionally 2.3 m (7 ft 7 in). The bark on younger trees is light grey, thin and covered with resin blisters. On older trees, it darkens and develops scales and furrows. The leaves are needle-like, flattened, 2–4.5 cm (0.79–1.77 in) long and 2 mm (0.079 in) wide by 0.5 mm (0.02 in) thick, matte dark green above, and with two white bands of stomata below, and slightly notched at the tip. The leaf arrangement is spiral on the shoot, but with each leaf variably twisted at the base so they lie flat to either side of and above the shoot, with none below the shoot. The shoots are orange-red with dense velvety pubescence. The cones are 9–17 cm (3.5–6.7 in) long and 4–6 cm (1.6–2.4 in) broad, dark purple before maturity; the scale bracts are short, and hidden in the closed cone. The winged seeds are released when the cones disintegrate at maturity about 6–7 months after pollination.

The wood is soft and not very strong; it is used for paper making, packing crates and other cheap construction work. The foliage has an attractive scent and is sometimes used for Christmas decoration, including Christmas trees.

It is also planted as an ornamental tree in large parks, though its requirement for cool, humid summers limits the areas where it grows well; successful growth away from its native range is restricted to areas like western Scotland and southern New Zealand.

All content from Kiddle encyclopedia articles (including the article images and facts) can be freely used under Attribution-ShareAlike license, unless stated otherwise. Cite this article:
Abies amabilis Facts for Kids. Kiddle Encyclopedia.