Highway 16 is a highway in British Columbia, Canada. It is an important section of the Yellowhead Highway, a part of the Trans-Canada Highway that runs across Western Canada. The highway closely follows the path of the northern B.C. alignment of the Canadian National Railway. The number "16" was first given to the highway in 1942, and originally, the route that the highway took was more to the north of today's highway, and it was not as long as it is now. Highway 16 originally ran from New Hazelton east to an obscure location known as Aleza Lake. In 1947, Highway 16's western end was moved from New Hazelton to the coastal city of Prince Rupert, and in 1953, the highway was re-aligned to end at Prince George. In 1969, further alignment east into Yellowhead Pass was opened to traffic after being constructed up through 1968 and raised to all-weather standards in 1969. Highway 16's alignment on the Haida Gwaii was commissioned in 1984, with BC Ferries beginning service along Highway 16 to the Haida Gwaii the following year.

The 101 km (63 mi) segment of the 1,347 km (837 mi)-long B.C. Highway begins in the west in the village of Masset, on the northern coast of Graham Island. Proceeding south, the highway goes 38 km (24 mi) to the inlet town of Port Clements. Winding its way along the boundary of Naikoon Provincial Park, Highway 16 goes south for 27 km (17 mi) before reaching the community of Tlell. 36 km (22 mi) south of Tlell, Highway 16 reaches Skidegate, where its Haida Gwaii section terminates.

BC Ferries then takes Highway 16 across the Hecate Strait for 172 km (107 mi) due northeast to its landing at Prince Rupert. 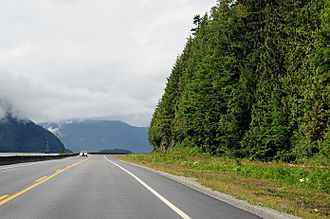 From Prince Rupert, Highway 16 begins its winding route east through the Coast Mountain Ranges. Following the Skeena River, the highway travels for 151 km (94 mi) to the city of Terrace. Highway 37 merges onto Highway 16 from north of Highway 16, at the Kitwanga junction. Another 43 km (27 mi) northeast, Highway 16 reaches New Hazelton, where it then veers southeast along the Bulkley River. 68 km (42 mi) later, the highway reaches the town of Smithers, proceeding southeast another 64 km (40 mi) to the village of Houston. 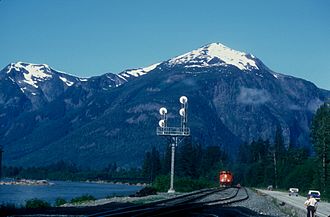 Along the Skeena River, near Kitwanga 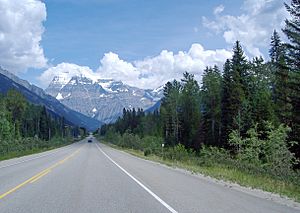 120 km (75 mi) east of Prince George, Highway 16 reaches the community of Dome Creek, where it converges with the Fraser River and turns southeast. It follows the Fraser River upstream for 82 km (51 mi) to McBride, then continues upstream for another 64 km (40 mi) to its junction with Highway 5 at Tête Jaune Cache. 14 km (8.7 mi) east of Tête Jaune Cache, Highway 16 enters Mount Robson Provincial Park, coursing through the park for 63 km (39 mi) to the boundary between British Columbia and Alberta within Yellowhead Pass.

From west to east, the following intersections are observed along Highway 16. Distances exclude the 172 km (93 nmi) ferry between Skidegate and Prince Rupert.

All content from Kiddle encyclopedia articles (including the article images and facts) can be freely used under Attribution-ShareAlike license, unless stated otherwise. Cite this article:
British Columbia Highway 16 Facts for Kids. Kiddle Encyclopedia.