Port Alberni is a city located on Vancouver Island in the province of British Columbia, Canada.

Port Alberni was named for Captain Pere d'Alberní, a Spanish officer, who commanded Fort San Miguel at Nootka Sound on Vancouver Island's west coast from 1790 to 1792. 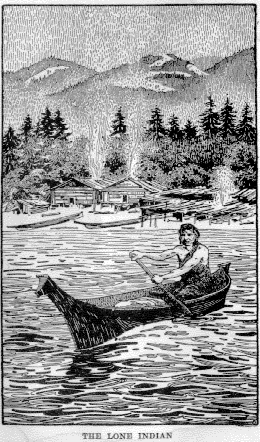 Illustration from Indian Legends of Vancouver Island by Alfred Carmichael

Before Europeans came, Alberni and the West Coast of Vancouver Island was the traditional territory of the Tseshaht and Hupacasath First Nations of the Nuu-Chah-Nulth Tribal Council. The Nuu-chah-nulth were previously called the Nootka. Many place names in Port Alberni have a Nuu-chah-nulth origin, such as Somass (washing), Kitsuksis (log across mouth of creek), Pacheena (foamy), and Nootka (go around). Ancient petroglyph carvings can be found at Sproat Lake.

In March 1787, Captain Charles William Barkley of the Imperial Eagle, explored Barkley Sound, which now bears his name. Barkley travelled with his 17-year-old bride, Frances Barkley, the first European woman to visit what is now British Columbia. Frances Barkley is also the name of one of the two vessels that makes trips down the Alberni Inlet from Port Alberni to Bamfield and Ucluelet. The other, since retired, was the MV Lady Rose.

In 1856, Adam Horne, a Scottish fur trader employed by the Hudson's Bay Company, was directed to locate a land route across Vancouver Island. There were stories that the natives used a trail starting at Qualicum. Adam Horne found this trail leading to the Alberni Valley and it became known as the Horne Lake Trail. Many other settlers used this trail to get to the Alberni Valley. 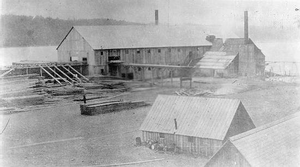 In 1860, the Anderson company (a sawmilling company) from London England, took the advice of their Victoria agent Captain Edward Stamp and set up a sawmill operation. At the time, the American Civil War prevented the importation of timber from the southern United States. Gilbert Sproat and Edward Stamp transported men and machinery to Alberni. They received land grants from Governor James Douglas and started running the Anderson sawmill at the mouth of the Somass River in August 1861. The first mill in B.C. was built to export lumber. The original mill failed, but several others were established in the 1880s. Sproat Lake was named after Gilbert Sproat and Stamp Falls and Stamp River were named after Edward Stamp.

Rogers Creek, which flows through the centre of Port Alberni, was named after A.B. Rogers,the discoverer of Rogers Pass, when he surveyed in the Alberni Valley for the Canadian Pacific Railway in the late 19th century.

With ample western red cedar and Douglas fir forests surrounding the valley, the forest industry became the dominant economic force. Large logging operators moved in, namely Bloedel, Stewart and Welch. Sawmills were built at Alberni, Great Central Lake, and the McLean Mill. By the Second World War, plywood mills and a nascent pulp industry had started. For the next forty years, the forest industry reigned supreme. Port Alberni Mill opened as a kraft pulp mill in 1946, followed by two paper machines in 1957.

Today, the town is a major service centre for local, regional, and provincial governments, and a supply centre and hospital for west coast communities like Bamfield, Tofino, and Ucluelet. Currently, the natural resources of the area are taking centre stage again, but in a different way. Port Alberni is in the process of "re-developing" itself as a tourism destination. The area's amenities, such as the natural beauty of the area, the opportunities for fishing (both marine and freshwater), its convenience as a jumping-off point for new outdoor recreation and ecotourism activities such as hiking, kayaking, and mountain-biking, lend themselves to these activities very well. 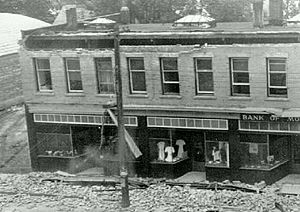 Damage to Bank of Montreal in Port Alberni by the 1946 Vancouver Island earthquake.

In 1964, Port Alberni was hit by two tsunamis (called tidal waves in 1964) during the Good Friday earthquake. The water rose about one foot in a minute reaching ten feet above the high-water mark. About 375 homes were damaged and 55 were washed away, however there were no injuries or fatalities.

The Alberni Valley has a museum and many ancillary attractions. Sproat Lake, located just outside Port Alberni.

Located at the head of the Alberni Inlet, Port Alberni lies adjacent to this natural harbour as well as the Somass River. The other end of the inlet is located on Barkley Sound, which includes the Broken Group Islands, considered to be one of the best areas for kayaking in the world.Sproat lake is located 10 km west of the city, and the valley is guarded by the snow-covered peaks of the Beaufort range, Mount Arrowsmith and Mount Klitsa, and surrounded by mountains on all sides. Kuth-kah-chulth, is the Nuu-Chah-Nulth name for Mount Arrowsmith. 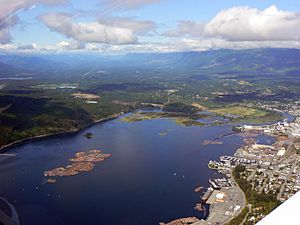 Head of the inlet

The city itself owes its unique layout to its former "twin city" status, due to its two official city centres, as well as the numerous creeks and ravines that bisect the townsite. The former city of Alberni is now dubbed "North Port", and is centered at Highway 4 and Gertrude Street. Visitors continuing onward to the west coast will pass this intersection, marked by the historic Alberni Post Office on the Southeast corner. Much of Port Alberni's recent development has occurred in the North Port area, especially "up the hill", east of the North Port downtown.

The former City of Port Alberni (now referred to as "South Port" or "Uptown") can be found about 3 km South on 3rd and Argyle street. In 2004, the Capitol Theatre, a local landmark in South Port, underwent extensive renovations and emerged as a stately yet modern relic of past times. This theatre now often hosts live performances. South Port is anchored by the Harbour Quay, a waterfront collection of shops, art galleries, great food and parks. The Port Alberni railway station, farmers market on Saturdays, as well as the Maritime Discovery Centre can be found here.

The city's West End is an eclectic mix of new suburban style homes, large acreages, and two First Nations reserves. Much of the residential growth over the past decade has occurred in the city's West End, where the Westporte neighbourhood has taken shape.

Port Alberni's dry July gives it a warm-summer Mediterranean climate (Koppen Csb), although it is much wetter than most such places. Although the summer months do see a relatively small amount of precipitation, the vast majority of it comes during the winter months as cool, moist air flows from the Pacific Ocean over the much colder B.C. coast. Despite its location on the relatively dryer east side of Vancouver Island, the resulting weak rain shadow is not enough to keep the city dry.

One major characteristic known is the twin city demographic, where previously there were the distinct Port Alberni and Alberni municipalities, the remnants remain with two distinct city centres.

In the past two years Port Alberni’s Sockeye salmon returns have been the largest in recorded history, topping the 1.4 million mark both years. The two primary spawning lakes, Great Central and Sproat, saw over 800,000 Sockeye return. Chinook and Coho salmon returns have been average to good, providing anglers with great salmon fishing from early June through September in the saltchuck and all year round in the lakes and rivers. A team of salmon enhancement volunteers and the Department of Fisheries and Oceans have been improving salmon habitat throughout the Alberni Valley, adding a Coho hatchery at the McLean Mill National Historic Site, in addition to the highly successful Robertson Creek Hatchery on the Stamp River. Port Alberni was awarded the World Fishing Network’s coveted “Ultimate Fishing Town” designation in 2010. 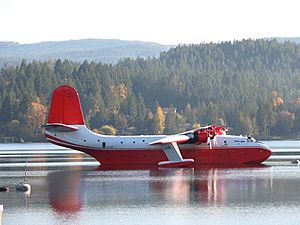 The city is also known for its fishing. Its waters contain five different species of salmon and yearly runs of steelhead. Halibut can also be found in the saltwater inlets near the city.

The state-of-the-art Robertson Creek Fish Hatchery is the most successful hatchery on Vancouver Island, producing chinook salmon, coho salmon, and steelhead smolts. It is located a short drive west of Port Alberni. and is open to the public.

Port Alberni is home to the McLean Mill National Historic Site which incorporates a steam railway from the downtown harbour to the saw mill up the valley. The historic mill offers demonstrations, including operating the old mill.

The world's largest aerial firefighting flying boats, the Martin Mars Water Bombers, once made their home on nearby Sproat Lake. This lake is also a popular summer destination for local residents and cottagers from surrounding areas. The sole remaining Water Bomber is now owned by The Coulson Group, and has been renamed from the Martin Mars Water Bombers to the Coulson Flying Tankers. The provincial lake also provided petroglyphs carved First Nations many years ago.

Besides the offers from nature, the city has two quays, Harbour Quay and Victoria Quay include shops, restaurants, and art galleries along the inlet. In addition, at the Victoria Quay the fall, during dusk and low tide in the inlet, black bears can be viewed walking along the other side of the quay looking for fish.

Della Falls, the tallest falls (442m) in Canada, is accessible by boat from Great Central Lake or by helicopter. Helicopters are not allowed to land in Strathcona Provincial Park.

Port Alberni has some of the best hiking on Vancouver Island. There are over 100 trails in and around the Alberni Valley, including mountain bike trails for all abilities. There is easy quick access to the alpine areas, including Mount Arrowsmith.

Port Alberni Airport (CBS8) is located 11 km (6.8 mi) north west of the city. The airport has a 4,000 ft (1,200 m) runway with another additional 2,500 ft (760 m) of taxiways and apron. The airport is home to a number of key tenants, including Coulson Aircrane, Canadian Aero Technologies, Alberni Valley Flying Club and Vancouver Island Helicopters.

The Port of Port Alberni regularly receives large oceangoing cargo vessels, such as the Hong Kong-based OYSTER BAY and the Bergen-based STAR LINDESNES, as well as tugs, fishing boats, and search and rescue vessels.

The chief source of employment in Port Alberni is the forest industry. In the 1950s, 60's and 70's the forestry labour force in Port Alberni was one of the highest paid in the country. However, over the last fifteen years there has been a decline in the forestry industry and a consequent relative decline in the economy of the city and of its residents. The Alberni Valley's forests consist primarily of Douglas fir, hemlock, yellow cedar and western red cedar. Most of the old growth forests have been logged with current logging coming from second growth forests. Port Alberni Mill, owned by Catalyst Paper, sits on the edge of the Alberni Inlet. It produces 340,000 tonnes of directory paper and lightweight coated paper each year. There is also a lumber mill, Alberni Pacific Division, that also sits on the inlet. Several smaller sawmills exist throughout the valley. Farming is also practised in the valley.

Port Alberni also serves as a hub for those travelling to the West Coast of Vancouver Island, including Ucluelet, Tofino and Pacific Rim National Park. As commodities tend to be much pricier in these remote areas, campers and travellers often do their shopping in Port Alberni before continuing their journey. This has resulted in development along the Johnston Road (Highway 4) corridor, including several big box retailers, grocery stores and strip mall developments. Previously, eco-tourism companies have set up shop in the Alberni Valley, taking advantage of the city's location on the fringe of wilderness yet proximate location to Vancouver and Victoria. For example, there's a kayaking, ATV touring, a windsurfing and a glider company.

All content from Kiddle encyclopedia articles (including the article images and facts) can be freely used under Attribution-ShareAlike license, unless stated otherwise. Cite this article:
Port Alberni Facts for Kids. Kiddle Encyclopedia.