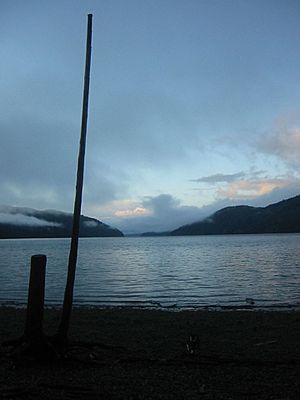 Alberni Inlet (formerly known as Alberni Canal) is a long, narrow inlet in Vancouver Island, British Columbia, Canada, that stretches from the Pacific Ocean at Barkley Sound about 40 km (25 mi) inland terminating at Port Alberni. It was named by the Spanish explorer Francisco de Eliza after Pedro de Alberni, Captain of the Free Company of Volunteers of Catalonia who was appointed in the Spanish fort in Nootka Sound from 1790 to 1792. The inlet includes traditional territories of the Ucluelet, Uchucklesaht, Huu-ay-aht, Hupacasath, and Tseshaht peoples, who are part of the Nuu-chah-nulth Tribal Council people.

Exposed to the open Pacific, Alberni Inlet has been subject to tsunamis. The largest in historic times was the result of the Good Friday earthquake in Alaska in 1964, and destroyed part of downtown Port Alberni.

The narrow inlet amplified the size and intensity of the wave, and when it struck the two towns it had a height of 2.44 m (8 ft 0 in). One hour later, a second, larger wave of 3.05 m (10.0 ft) hit. It was the second wave that caused most of the damage, lifting houses off their foundations and sweeping log booms onto the shore. The second wave was followed by four more waves ranging in height from 1.52 and 1.83 m (5 ft 0 in and 6 ft 0 in) and occurring at roughly 90-minute intervals. In total, the tsunami washed away 55 homes and damaged 375 others.

Tsunamis have repeatedly hit the First Nations village Huu-ay-aht of Sarita, which is situated on a low sand beach about halfway along the inlet's eastern shore.

In 1931 there was a recommendation that the name be changed from canal to inlet so that foreign shippers would not mistake it for a canal. As described by the BCGNIS:

First labelled Canal de Alberni on Spanish charts. In 1931 H.D.Parizeau, Hydrographic Service recommended that the ambiguous term 'canal' be changed to 'inlet', "...it is most important for the foreign trade existing between Port Alberni and the outside world, that this word canal, which is greatly mistaken, should be changed for the proper word of inlet. It is needless to tell you that a great difficulty of this word canal comes in with the foreign shipping in general, who figure themselves the extra expense and the danger attached to sending their ships through a canal; for they figure that Alberni Canal is something similar to Manchester Canal, Panama Canal and Suez Canal, where extra fees for pilotage, canal dues, extra insurance and so forth come into the question."

The name change was officially approved in 1945.

Other inlets on the Northwest Coast continue to use "canal" names - the most notable being Lynn Canal, Portland Canal and Hood Canal.

All content from Kiddle encyclopedia articles (including the article images and facts) can be freely used under Attribution-ShareAlike license, unless stated otherwise. Cite this article:
Alberni Inlet Facts for Kids. Kiddle Encyclopedia.