Sproat Lake is a lake on central Vancouver Island in British Columbia, Canada. It was known as Kleecoot (meaning "wide open") by local indigenous people.

Roughly cross-shaped with four arms, it is over 25 kilometres in length, and has 90.8 kilometres of shoreline. Home of the last Martin Mars type waterbombers, and near Port Alberni, Sproat Lake is a popular summer recreational area for the Alberni Valley. Highway 4 runs along its north shore.

The lake maintains a small wintering population of Marbled Murrelets which also nest in the area, the only freshwater alcids on Earth.

Although Sproat Lake is best known for being a scenic vacation spot, it is known to most archaeologists as a site left over by Archaic people no older than 11,000 BCE. The bow and arrow reached the region sometime early in this period, between 750 and 100 (cal) BCE (Blitz 1988; Pettigrew 1990; Ross 1990). The K’ak’awin petroglyph may represent a mythical or actual sea creature from ancient times. Many believe that they were carved by ancestors of the Nootka people from British Columbia, but there is no concrete evidence pointing to them. Not much is actually known about the people who created them.

Until 1864 this lake was known by its anglicized Nootka name of Kleecoot. From then it was renamed by Robert Brown of the Vancouver Island Exploring Expedition as Sproat Lake in honour of entrepreneur and colonial official Gilbert Malcolm Sproat. 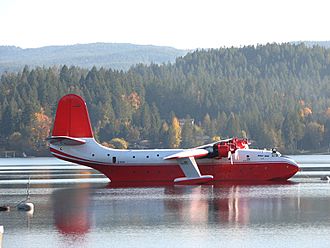 In 1959 four Martin JRM Mars large, four-engined cargo transport flying boats, designed and built by the Martin Company for the United States Navy during World War II, were acquired by Forest Industries Flying Tankers (FIFT) to use as firefighting water bombers. The company was formed to bid for the four aircraft and a large spares inventory, and represented a consortium of British Columbia forest companies. The bid was accepted and the sale completed in December 1959. The four aircraft were flown to Fairey Aviation at Victoria, British Columbia, for conversion into water bombers. The conversion involved the installation of a 6,000 imp gal (27,000 l; 7,200 US gal) plywood tank in the cargo bay with retractable pick-up scoops to allow uploading of water while the aircraft was taxiing. The scoops allowed 30 tons of water to be taken on board in 22 seconds. Later some of the hull fuel tanks were replaced with water tanks.

All content from Kiddle encyclopedia articles (including the article images and facts) can be freely used under Attribution-ShareAlike license, unless stated otherwise. Cite this article:
Sproat Lake Facts for Kids. Kiddle Encyclopedia.