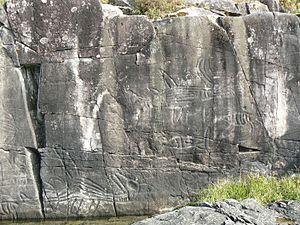 One of the park's most significant features is a panel of petroglyphs called "K’ak’awin" on lakeshore rocks depicting mythological figures. Though little is known of the origin of the prehistoric images, the area has been traditionally occupied by the Hupacasath First Nation.

The 39-hectare park on Highway 4 is 15 kilometres west of Port Alberni and is a popular recreation area featuring swimming and boating in Sproat Lake and camping. On the north shore of the lake, there is a popular boat launch, a small beach and 58 vehicle-accessible campsites in the park. The park is near the home base of Coulson Flying Tankers, which operates Martin Mars water bombers.

All content from Kiddle encyclopedia articles (including the article images and facts) can be freely used under Attribution-ShareAlike license, unless stated otherwise. Cite this article:
Sproat Lake Provincial Park Facts for Kids. Kiddle Encyclopedia.