Kids Encyclopedia Facts
This page is about a group of islands in British Columbia, Canada. For other uses, see Gulf Islands (disambiguation).

The Gulf Islands are a group of islands located in the Salish Sea between Vancouver Island and the mainland coast of British Columbia.

The name "Gulf Islands" comes from "Gulf of Georgia," the original term used by George Vancouver in his mapping of the southern part of the archipelago and which before the San Juan Island dispute also was taken to include what have since been called the San Juan Islands. Strictly speaking, the Strait of Georgia is only the wide, open waters of the main strait between the mainland and Vancouver Island, and does not officially refer to the adjoining waters between the islands and Vancouver Island but has become a common misnomer for the entire Gulf, which includes waters such as Active Pass (between Galiano Island and Mayne Island), Trincomali Channel (between Galiano Island and Saltspring Island), Sansum Narrows (between Saltspring Island and Vancouver Island), and Malaspina Strait (between Texada Island and the mainland around Powell River). "The Gulf" refers to all such waters collectively, and to those communities and shores surrounding it. Only the term "Strait of Georgia" remains in the provincial gazette although its use as a synonym for the Gulf is unofficial, while the term Gulf of Georgia remains in current use though not in the provincial gazette.

The term Salish Sea was adopted in 2010 to refer to the Strait of Georgia, the Strait of Juan de Fuca, Puget Sound, and all connecting and adjoining waters. 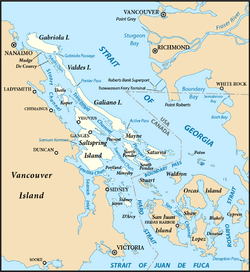 The Southern Gulf Islands are located near the southern end of the Strait of Georgia, forming an intricate network of waterways between them collectively referred to as part of the Salish Sea. The Southern Gulf Islands include hundreds of islands and islets, and form part of a larger archipelago that also includes the nearby San Juan Islands of the state of Washington, in the United States.

The major Southern Gulf Islands are as follows: 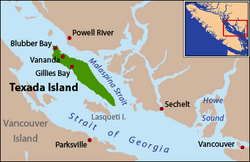 The Northern Gulf Islands are located near the northern end of the Strait of Georgia, including all islands south of Savary Island, the southernmost island of the neighbouring Discovery Islands.

The major Northern Gulf Islands are as follows: 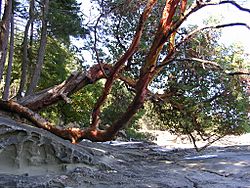 Arbutus trees and sandstone beaches are common in the Gulf Islands.

The islands and surrounding ocean are rich with ecologically diverse plants and sea life including Garry oaks, wild lilies, kelp beds and Orcas.

Today, Garry oak meadows exist in the shallow and exposed soil of valleys, rocky foothills and southern slopes—areas that the settlers of the past 150 years have found unsuitable for agriculture or development.

The Garry Oak Ecosystems Recovery Team (GOERT), a partnership of a number of governmental and non-governmental agencies that comprise 22 individuals, was established in 1999 after the delegates of the First International Garry Oak Ecosystem Symposium met in Victoria and declared the ecosystem endangered. Since then, GOERT has been working to motivate public and private restoration of the rare ecosystem and promote conservation activities. [1]

The unique ecosystem of the islands has been a focal point of conservation efforts for decades. BC Parks operates a variety of provincial parks on the islands, the oldest being Mount Maxwell Provincial Park on Salt Spring Island. 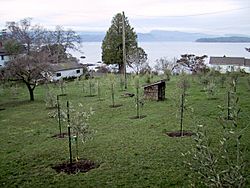 In most parts of Canada, olive trees cannot thrive; the long, harsh winter and short, humid summer and spring make it difficult for olives to grow comfortably and properly, but Pender Island, Saturna Island, and Salt Spring Island have a Mediterranean style climate that permits olive production.

Banana Joe Clemente was one of the first Islanders to introduce olive trees to the Southern Gulf Islands in 1993 growing dozens from seed. In 1994 / 1995 planting a grove of the seed-grown olive trees around a Botchi pit on Salt Spring Island. He also distributed them to Islanders for their private gardens. Banana Joe is also responsible for introducing Musa basjoo, a hardy species of Banana plant to Salt Spring Island. Farm owner Andrew Butt planted his first olive tree in 2001 at his farm on Pender Island, using Frantoio and Leccino cultivars that he obtained from California. He uses kelp obtained from the surrounding straits as fertilizer and uses a pruning method that enhances the sunlight exposure on the trees. Michael Pierce and colleagues established an olive tree nursery on Saturna Island in 2009 that supplied olive trees to the region.

The larger populated islands are served by BC Ferries, which operates various vehicle and passenger ferries between the Gulf Islands and to terminals near the major cities of Nanaimo and Victoria on Vancouver Island as well as Vancouver on the mainland.

All content from Kiddle encyclopedia articles (including the article images and facts) can be freely used under Attribution-ShareAlike license, unless stated otherwise. Cite this article:
Gulf Islands Facts for Kids. Kiddle Encyclopedia.