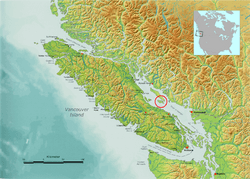 Lasqueti Island (US /ləˈskiːti/) is an island off the east coast of Vancouver Island in the Strait of Georgia, qathet Regional District, British Columbia, Canada and has a population of 399 people. A passenger-only ferry connects the island to the community of French Creek, near Parksville. The ferry makes two to three runs per day, five days per week, weather permitting. 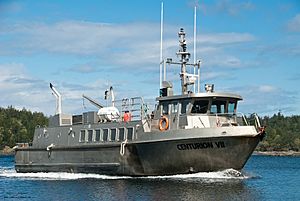 The ferry from Vancouver Island to Lasqueti Island, Centurion VII, coming into False Bay to dock.

The island community is an enclave of Canadian counter-culture. Lasqueti Island is one of the least developed of the major Gulf Islands. Its roads are mostly unpaved, and it is the only one of the larger Gulf Islands that is not currently connected to BC Hydro's electrical power grid. Solar, wind, micro-hydro, and fossil fueled generators power the island.

There is a hotel and a restaurant in False Bay, where the ferry arrives and departs. There are at least three B&B's on the island, but services are seasonal and very limited. Potable water may be scarce at times, in different places on the island. There are local markets and an informal food cooperative but they operate at odd hours, depending on the season and demand. Lasqueti island has a yearly Arts Festival on Canada Day Weekend, and other activities. These different festivals and informal activities feature local painters, sculptors, poets, fiction writers, and historians. Performing arts, on the Canada Day long-weekend, include: The Bolting Brassicas (marching band), the Lasquirkus (circus), and other activities.

The island has a reputation for sailing and sea kayaking which is considered among some of the finest, but also among the most challenging, in lower British Columbia. Tides and currents may become foreboding without warning - the winter weather down the Strait of Georgia has been responsible for various mariners' deaths.

The island is currently under the jurisdiction of the Oceanside RCMP detachment, based out of Parksville. The island maintains a two truck volunteer fire department. 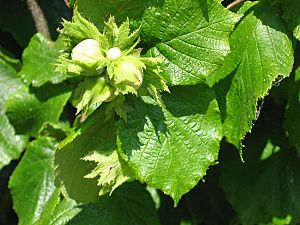 Hazelnuts growing in one of many orchards on Lasqueti Island.

Aquaculture includes clams, geoducks, oysters, honey mussels, and prawns. Agriculture include seasonal vegetables, orchards, nuts, and berries. There are a few farms on Lasqueti Island. Their products range from blueberries, apple juice, eggs, to maple syrup. There also is a shellfish farm and a shellfish hatchery.

The island is generally divided between drier areas, characterized by the presence of native arbutus, cacti, and other succulent plants, and wetter areas featuring red cedar. Some old growth forest still exists on this island as well, providing habitat for a unique mix of flora and fauna. The understory of the forests on the island have seen extensive damage due to the proliferation of feral sheep.

The soils on this island for the most part are shallow, stony deposits over bedrock which is almost entirely igneous and largely basaltic.

Panorama of False Bay from Heath Islet. In view on the horizon is Vancouver Island to the left and Finnerty Islands in the middle. False Bay is on the right side.

All content from Kiddle encyclopedia articles (including the article images and facts) can be freely used under Attribution-ShareAlike license, unless stated otherwise. Cite this article:
Lasqueti Island Facts for Kids. Kiddle Encyclopedia.