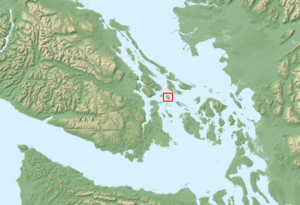 Moresby Island, in the Gulf Islands.

Moresby Island is one of the Gulf Islands of British Columbia, located on the west side of Swanson Channel and east of the southern end of Saltspring Island. It is not to be confused with Moresby Island, the second largest of the Haida Gwaii Islands off the north coast of BC. It is currently a privately owned island, and is used by its current owners to raise beef cattle. The island is not open to the general public. Its current population is 3 persons.

The island has been logged three times by separate Chinese logging companies. The evidence of this logging is nearly gone, yet there are a few signs of logging still remaining. Traces of the trails built for the machines can still be found. It has a very rich history, including a ghost story, the remains of a long-gone mansion, and evidence of First Nations people using the island as a resting place when traveling.

All content from Kiddle encyclopedia articles (including the article images and facts) can be freely used under Attribution-ShareAlike license, unless stated otherwise. Cite this article:
Moresby Island (Gulf Islands) Facts for Kids. Kiddle Encyclopedia.