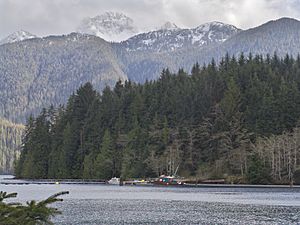 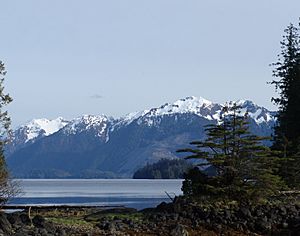 Gwaii Haanas National Park Reserve and Haida Heritage Site includes Moresby and other islands. The island, together with numerous nearby smaller islands and islets in the southern archipelago, is defined by Statistics Canada as Skeena-Queen Charlotte E (Now North Coast Regional District Area E), with a population of 402 as of the 2006 census. Almost all of its population resided in the unincorporated community of Sandspit, on the northeast corner of Moresby. The total land area of the electoral area is 3,399.39 km2 (1,312.51 sq mi). 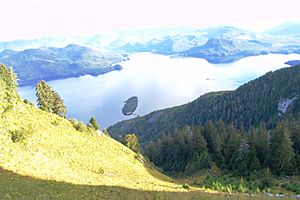 On October 27, 2012, an earthquake of magnitude 7.7 (the strongest earthquake in Canada since the 1949 Queen Charlotte Islands earthquake) was epicentred at a depth of 17.5 kilometres (10.9 miles) under the island.

Moresby Island is named for Rear Admiral Fairfax Moresby. The traditional name in the Haida language is Gwaii Haanas, which is where the national park name is derived from.

All content from Kiddle encyclopedia articles (including the article images and facts) can be freely used under Attribution-ShareAlike license, unless stated otherwise. Cite this article:
Moresby Island Facts for Kids. Kiddle Encyclopedia.