Kids Encyclopedia Facts
This page is about the island. For the district, see Saltspring Island Electoral Area.

Salt Spring Island or Saltspring Island is one of the Gulf Islands in the Salish Sea between mainland British Columbia, Canada and Vancouver Island.

The island was initially inhabited by various Salishan peoples before being settled by immigrant pioneers in 1859, at which time it was renamed Admiral Island. It was the first of the Gulf Islands to be settled and the first agricultural settlement on the islands in the Colony of Vancouver Island, as well as the first island in the region to permit settlers to acquire land through pre-emption. The island was retitled to its current name in 1910. It is named for the salt springs found in the northern part of the island.

Salt Spring Island is the largest, most populous, and the most frequently visited of the Southern Gulf Islands.

The island became a refuge from racism for African Americans who had resided in California. They left California in 1858 after the state passed discriminatory legislation against blacks. Several of the families settled on this island; others on Vancouver Island. Before the emigration, Mifflin Wistar Gibbs travelled with two other men up to the colony to interview Governor Sir James Douglas about what kind of treatment they could expect there. The Governor was a Guyanese man of multi-ethnic birth, and assured them that people of African descent in Canada would be fairly treated and that the colony had abolished slavery more than 20 years before.

The island was the first of the Gulf Islands to be settled by non-First Nations people. According to 1988's A Victorian Missionary and Canadian Indian Policy, it was the first agricultural settlement established anywhere in the Colony of Vancouver Island that was not owned by the Hudson's Bay Company or its subsidiary the Pugets Sound Agricultural Company. 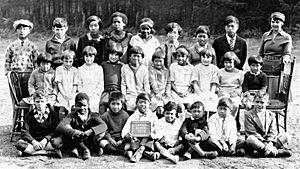 A 1929 class photo from Salt Spring Island's Central School reflecting the diverse make-up of the community.

Salt Spring Island was the first in the Colony of Vancouver Island and British Columbia to allow settlers to acquire land through pre-emption: settlers could occupy and improve the land before purchase, being permitted to buy it at a cost per acre of one dollar after proving they had done so. Before 1871 (when the merged Colony of British Columbia joined Canada), all property acquired on Salt Spring Island was purchased in this way; between 1871 and 1881, it was still by far the primary method of land acquisition, accounting for 96% of purchases. As a result, the history of early settlers on Salt Spring Island is unusually detailed.

Demographically, early settlers of the island included not only African Americans, but also Hawaiians, First Nation peoples, and British Isles settlers, including English, Irish and Scottish. The method of land purchase helped to ensure that the land was used for agricultural purposes and that the settlers were mostly families. Ruth Wells Sandwell in Beyond the City Limit indicates that few of the island's early residents were commercial farmers, with most families maintaining subsistence plots and supplementing through other activities, including fishing, logging and working for the colony's government. Some families later abandoned their land as a result of lack of civic services on the island or other factors, such as the livestock-killing cold of the winter of 1862.

During the 1960s, the island became a political refuge for United States citizens, this time for draft evaders during the Vietnam War. 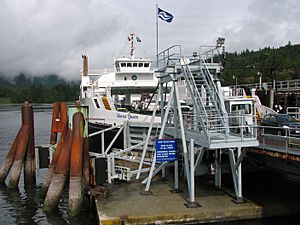 The island was known as "Chuan" or "Chouan" Island in 1854, but it was also called "Salt Spring" as early as 1855, because of the island's salt springs. In 1859, it was officially named "Admiralty Island" in honour of Rear-Admiral Robert Lambert Baynes by surveyor Captain Richards, who named various points of the island in honour of the Rear-Admiral and his flagship, HMS Ganges. Even while named "Admiralty Island", it was referred to popularly as Salt Spring, as in James Richardson's report for the Geological Survey of Canada in 1872. According to records of the Geographic Board of Canada, the island was officially retitled Saltspring on March 1, 1910, though the year 1905 is given by unofficial sources. According to the Integrated Land Management Bureau of British Columbia, locals incline equally to Salt Spring and Saltspring for current use. The official chamber of commerce website for the island, which gives a date of 1906 for the renaming, adopts the two word title, stating that the Geographic Board of Canada, in choosing the one word name, "cared nothing for local opinion or Island tradition."

Located between Mainland British Columbia and Vancouver Island, Salt Spring Island is the most frequently visited of the Gulf Islands as well as the most populous, with a 2016 census population of 10,557 inhabitants. The largest village on the island is Ganges. The island is known for its artists. In addition to Canadian dollars, island banks and most island businesses accept Salt Spring's own local currency, the Salt Spring dollar.

The island is part of the Southern Gulf Islands, (Salt Spring Island, Galiano Island, Pender Island, Saturna Island, Mayne Island), which are all part of the Capital Regional District, along with the municipalities of Greater Victoria. Salt Spring Island's highest point of elevation is Bruce Peak, which according to topographic data from Natural Resources Canada is just over 700 m (2,300 ft) above sea level.

Salt Spring Island has an temperate oceanic climate (cool summers and cool and wet winters). Summers are dry due to the rain shadow location and winters are wet due to the area being in the path of mid latitude storms in the westerlies. 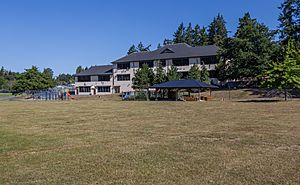 Local bus transit on the island is provided by BC Transit.

Library facilities have existed on Salt Spring in one form or another since the early 1930s. The demand for books and resources has only grown since then, requiring constant expansions over the years to accommodate the needs of the island residents. In December 2012, the new Salt Spring Island Public Library was opened. The library is staffed by two librarians and close to 200 volunteers.

All content from Kiddle encyclopedia articles (including the article images and facts) can be freely used under Attribution-ShareAlike license, unless stated otherwise. Cite this article:
Salt Spring Island Facts for Kids. Kiddle Encyclopedia.