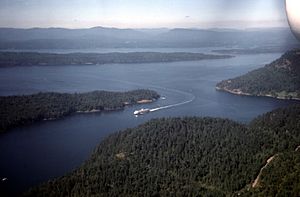 Active Pass (Saanich: sqθeq) is a strait separating Galiano Island in the north and Mayne Island in the south in the southern Gulf Islands, British Columbia, Canada. It connects the Trincomali Channel in the west and the Strait of Georgia in the east. The pass stretches 5.5 km from northeast to southwest with two roughly right angle bends at each end.

It was named for the USCS Active, a United States Navy survey vessel, the first steamer to navigate the pass in 1855. 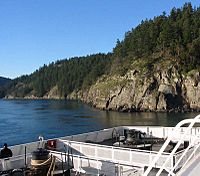 Active Pass from the Ferry Deck

From 1967 to 2011, the Active Pass light station was part of the British Columbia Shore Station Oceanographic Program, collecting coastal water temperature and salinity measurements for the Department of Fisheries and Oceans everyday for 44 years.

Currently, the pass is used by BC Ferries' passenger and vehicle ferry runs between Tsawwassen Ferry Terminal at Tsawwassen, Lower Mainland, the southern Gulf Islands and Swartz Bay Ferry Terminal at Swartz Bay, Vancouver Island. Because the pass has a river's narrowness, the ferries pass extremely close to its shores. It is also used by pleasure craft, fishing boats, freighters and freight ferries, making it very 'active' commercially as well. However, strong eddies and tide rips are always present in the pass, making it a hazardous corridor for smaller vessels to transit.

A variety of wildlife may be seen in the pass, including harbour seals, sea lions, bald eagles, and orcas.

All content from Kiddle encyclopedia articles (including the article images and facts) can be freely used under Attribution-ShareAlike license, unless stated otherwise. Cite this article:
Active Pass Facts for Kids. Kiddle Encyclopedia.