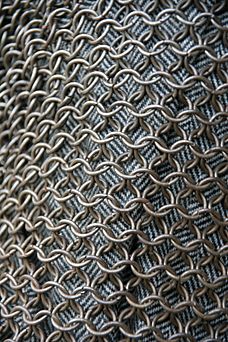 Mail, or chain mail, is a type of armour. It is made of small metal rings linked together in a pattern to form a mesh. The Celts are usually credited with inventing mail armour. Celtic mail was usually made in the form of a vest.

The origins* of the word "mail" are not fully known. One theory is that it originally comes from the Latin word macula, meaning "spot" or "opacity". Another theory relates the word to the Old French "maillier", meaning “to hammer” (related to the modern English word "malleable"). A mail shirt is a called a hauberk (haubergeon or byrnie). Mail leggings were called chausses. A mail Hood is called a coif and covered the head, neck and shoulders.

*Another possible source is Italian. The word for jersey or sweater, and sometimes shirt, in modern Italian is maglia.

Many scholars think mail was invented by ancient Celts about the 3rd century BC. At that time their iron work was probably the best in Europe. The Romans quickly adopted it for their own army. A shirt of mail armour weighed about 30 pounds (14 kg). After a battle it was common practice to strip weapons and armour from the dead. Vikings were known to wear mail armor whenever they could get their hands on it. Mail was expensive, time consuming to make, and required a supply of iron. It became more expensive as improvements were made in materials and workmanship. Mail armour was in use in Europe until the 15th century.

Mail is today used in gloves to prevent cuts by butchers and firefighters. Some divers wear mail suits when swimming around sharks and particularly when feeding sharks. But mail is heavy and it makes moving around more difficult. Mail is very popular by history reenactors. It is also popular in live action role playing.

All content from Kiddle encyclopedia articles (including the article images and facts) can be freely used under Attribution-ShareAlike license, unless stated otherwise. Cite this article:
Chain mail Facts for Kids. Kiddle Encyclopedia.