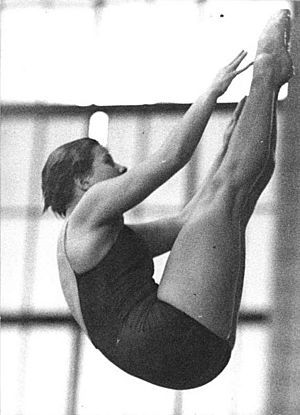 A diver in the pike position

Diving is a form of movement downwards, either from air to ground or to water. Diving is also a sport. Diving is often done from a springboard or an elevated platform.

Underwater diving includes Scuba diving. Scuba diving, however, is typically not considered a sport. Dives used for scuba diving are relatively simplistic. An example of this is a giant stride entry, also known as a stride dive. 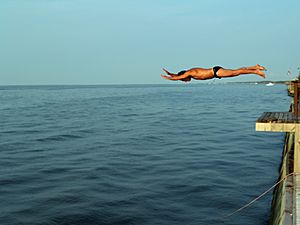 A man dives into the Great South Bay of Long Island

Most diving competitions consist of three disciplines: 1m and 3m springboards, and the platform. Competitive athletes are divided by gender, and often by age group. In platform events, competitors are allowed to perform their dives on either the five, seven and a half (generally just called seven) or ten meter towers. In major diving meets, including the Olympic Games and the World Championships, platform diving is from the 10 meter height.

Divers have to perform a set number of dives according to established requirements, including somersaults and twists. Divers are judged on whether and how well they completed all aspects of the dive, the conformance of their body to the requirements of the dive, and the amount of splash created by their entry to the water. A possible score out of ten is broken down into three points for the takeoff, three for the flight, and three for the entry, with one more available to give the judges flexibility.

The raw score is multiplied by a difficulty factor, derived from the number and combination of movements attempted. The diver with the highest total score after a sequence of dives is declared the winner.

Synchronized diving was adopted as an Olympic sport in 2000. Two divers form a team and perform dives simultaneously. The dives are usually identical; however, sometimes the dives may be opposites, in what is called a pinwheel. For example, one diver may perform a forward dive and the other an inward dive in the same position; or one may do a reverse and the other a back movement. In these events, the diving is judged both on the quality of execution and the synchronicity – in timing of take-off and entry, height and forward travel.

There are rules governing the scoring of a dive. Usually a score considers three elements of the dive: the approach, the flight, and the entry. The primary factors affecting the scoring are:

The score is computed in the same way as for individual events with seven judges (i.e. highest and lowest deleted, then the sum of the remaining five reduced by 3/5, then multiplied by the Degree of Difficulty).

The synchronisation scores are based on: 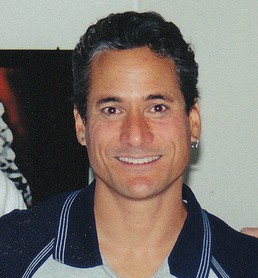 To win dive meets, divers create a dive list in advance of the meet. To win the meet the diver must accumulate more points than other divers. Often, simple dives with low DDs will look good to spectators but will not win meets. The competitive diver will attempt the highest DD dives possible with which they can achieve consistent, high scores. If divers are scoring 8 or 9 on most dives, it may be a sign of their extreme skill, or it may be a sign that their dive list is not competitive, and they may lose the meet to a diver with higher DDs and lower scores.

In competition, divers must submit their lists beforehand, and once past a deadline (usually when the event is announced or shortly before it begins) they cannot change their dives. If they fail to perform the dive announced, even if they physically cannot execute the dive announced or if they perform a more difficult dive, they will receive a score of zero. Under exceptional circumstances, a redive may be granted, but these are exceedingly rare (usually for very young divers just learning how to compete, or if some event outside the diver's control has caused them to be unable to perform).

There are six different types of dives, and four different body positions that a person can use when diving. 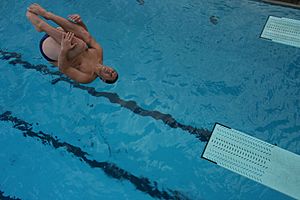 Dives are put into categories, based on the Direction the dive is in, and what Position it is in.

Every Half flip the number on the end goes up by one For example: *Front dive Tuck is a 101c

Since the parabola is symmetrical, the travel away from the board as the diver passes it is twice the amount of the forward travel at the peak of the flight. Excessive forward distance to the entry point is penalized when scoring a dive, but obviously an adequate clearance from the diving board is essential on safety grounds.

The greatest possible height that can be achieved is desirable for several reasons:

The magnitude of angular momentum remains constant throughout the dive, but since

and the moment of inertia is larger when the body has an increased radius, the speed of rotation may be increased by moving the body into a compact shape, and reduced by opening out into a straight position.

Since the tucked shape is the most compact, it gives the most control over rotational speed, and dives in this position are easier to perform. Dives in the straight position are hardest, since there is almost no scope for altering the speed, so the angular momentum must be created at take-off with a very high degree of accuracy. (A small amount of control is available by moving the position of the arms and by a slight hollowing of the back).

The opening of the body for the entry does not stop the rotation, but merely slows it down. The vertical entry achieved by expert divers is largely an illusion created by starting the entry slightly short of vertical, so that the legs are vertical as they disappear beneath the surface. A small amount of additional tuning is available by 'entry save' techniques, whereby underwater movements of the upper body and arms against the viscosity of the water affect the position of the legs. 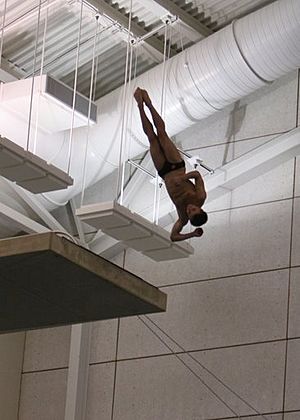 A twisting dive performed from a 10 meter platform.

Dives with multiple twists and somersaults are some of the most spectacular movements, as well as the most challenging to perform.

The rules state that twisting 'must not be generated manifestly on take-off'. Consequently, divers must use some of the somersaulting angular momentum to generate twisting movements. The physics of twisting can be explained by looking at the components of the angular momentum vector.

As the diver leaves the board, the total angular momentum vector is horizontal, pointing directly to the left for a forward dive for example. For twisting rotation to exist, it is necessary to tilt the body sideways after takeoff, so that there is now a small component of this horizontal angular momentum vector along the body's long axis. The tilt can be seen in the photo.

The tilting is done by the arms, which are outstretched to the sides just before the twist. When one arm is moved up and the other is moved down (like turning a big steering wheel), the body reacts by tilting to the side, which then begins the twisting rotation. At the completion of the required number of twist rotations, the arm motion is reversed (the steering wheel is turned back), which removes the body's tilt and stops the twisting rotation.

The rules state that the body should be vertical, or nearly so, for entry. Strictly speaking, it is physically impossible to achieve a literally vertical position throughout the entry as there will inevitably still be some rotational momentum while the body is entering the water. Divers therefore attempt to create the illusion of being vertical, especially when performing rapidly rotating multiple somersault movements. One technique is to allow the upper body to enter slightly short of vertical so that the continuing rotation leaves the final impression of the legs entering vertically. Another is to use "entry save" movements of scooping the upper body underwater in the direction of rotation so as to counteract the rotation of the legs.

The arms must be beside the body for feet-first dives, which are typically competed only on the 1m springboard and only at fairly low levels of competition, and extended forwards in line for "head-first" dives, which are much more common competitively. It used to be common for the hands to be interlocked with the fingers extended towards the water, but a different technique has become favoured during the last few decades. Now the usual practice is for one hand to grasp the other with palms down to strike the water with a flat surface. This creates a vacuum between the hands, arms and head which, with a vertical entry, will pull down and under any splash until deep enough to have minimal effect on the surface of the water (the so-called "rip entry").

Once a diver is completely under the water they may choose to roll or scoop in the same direction their dive was rotating to pull their legs into a more vertical position.

All content from Kiddle encyclopedia articles (including the article images and facts) can be freely used under Attribution-ShareAlike license, unless stated otherwise. Cite this article:
Diving Facts for Kids. Kiddle Encyclopedia.