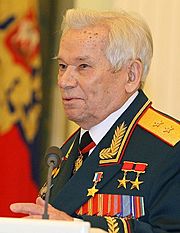 Mikhail Timofeyevich Kalashnikov (10 November 1919 – 23 December 2013) was a Russian designer who is known for designing the AK-47, AKM, and AK-74 assault rifles when he served in the Soviet Army during World War II.

Kalashnikov was born on 10 November 1919 in Kuriya, Altai Krai, Russian SFSR. He served in World War II and created many weapons and bombs including the AK-47 and a submachine gun. He was married to Ekaterina Kalashnikova. They had three children. He lived in Izhevsk, Udmurtia.

All content from Kiddle encyclopedia articles (including the article images and facts) can be freely used under Attribution-ShareAlike license, unless stated otherwise. Cite this article:
Mikhail Kalashnikov Facts for Kids. Kiddle Encyclopedia.