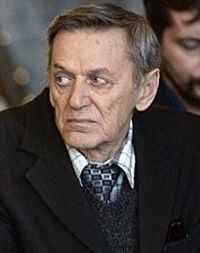 Kalashnikov at his father's funeral, December 2013

Victor Mikhailovich Kalashnikov (Russian: Ви́ктор Миха́йлович Кала́шников; 16 July 1942 – 27 March 2018) was a Russian small arms designer/ He was known for developing the PP-19 Bizon submachine guns. He was the son of Mikhail Kalashnikov. He was born in Kazakh SSR, Soviet Union. He began his weapon designing career in 1966 by conducting a series of tests of the AK-47.

Kalashnikov died at a university hospital in Izhevsk, Russia on 27 March 2018 at the age of 75.

All content from Kiddle encyclopedia articles (including the article images and facts) can be freely used under Attribution-ShareAlike license, unless stated otherwise. Cite this article:
Victor Kalashnikov Facts for Kids. Kiddle Encyclopedia.