Izhevsk is the capital city of the Udmurt Republic, Russia, located along the Izh River in the Western Ural Mountains. Its population is 629,455 (2012 est.), up from 627,734 recorded in the 2010 Census, making it the nineteenth largest city in Russia and the largest in the republic.

From 1984 to 1987, the city was called Ustinov (in honour of the Minister of Defense of the USSR and the Marshal of the Soviet Union, Dmitry Ustinov). The city is a major hub of industry, commerce, politics, culture, and education in the Volga Region. It is famous for its defense, engineering, and metallurgy industries. Izhevsk has the titles of the Armory Capital of Russia and the City of Labor Glory.

In the 1870s, trade blossomed in Izhevsky Zavod. Bodalev Brothers, Mokletsov, Ogloblin, Sveshnikov, and Sozykin were the most successful merchants. It was profitable to deal in spirits. There were three vodka distilleries, four wine warehouses, three wine cellars, and about fifty taverns in 1872.

Izhevsk is now a major economic center for the Udmurt Republic. Military industry is the most popular type of economy in Izhevsk. Many military companies operate in the city. The companies produce military guns that are popular in Russia and other countries. The companies also are known to produce automobiles. In 2006, the Venezuelan president Hugo Chávez took a tour in the city, and he wanted to purchase many of the popular weapons available.

Izhevsk is the scientific and cultural center of the Udmurt Republic. Early on, the state took a leading role in childcare and education. 320 Public kindergartens/ preschools provide affordable childcare for 32,000 children. 100 Public schools provide free general education to over 100,000 Izhevsk students. A wide variety of technical colleges and two-year professional schools award associate degrees, most notably in medical assistance, performing arts and teaching.

The Ural department of the Russian Scientific Academy is represented in Izhevsk by several institutions, specializing in physics, applied mechanics and technical sciences, and economics, and the Institute of History. Udmurt State University celebrated its 75th anniversary in 2006. It is the oldest educational institution in the Udmurt Republic. Some 28,000 students are currently studying at the University, which offers 86 different majors. The university has thirteen departments and seven institutes.

There are about fifty museums and galleries in Izhevsk. The most popular of them are: 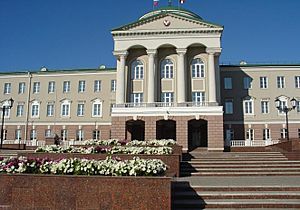 Presidential Palace of the Udmurt Republic, located in Izhevsk

The Kalashnikov Museum and Exhibition Complex of Small Arms, or the Kalashnikov Museum, was appeared in 2004. Its expositions tell about Izhevsk as one of the most important center of Russian arms production. The main person of the museum narration is Mikhail Kalashnikov. The museum and exhibition complex holds the permanent exposition devoted to this legendary Russian armourer. There are temporary expositions in addition to the permanent exposition launched in 2004. The Museum has the demonstration hall, including the shooting gallery where different models of historical and contemporary arms are presented, and the pneumatic shooting gallery.

17 kilometers from Izhevsk the Ludorvay Architectural and Ethnographic Open-air Museum is situated. It was founded in 1990 on the premises of the former Russian settlement Ilyinka. Total area of the culture preserve is about 40 hectares. It divided into 5 exhibition parts: the Sector of Central Udmurts, the Sector of Southern Udmurts, Russian sector, the Windmill, and the Mushtor Apiary Complex.

Izhevsk has a number of theaters, among the most prominent of which are: 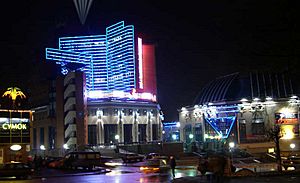 One of the integral parts of Izhevsk cultural life is the State Circus of the Udmurt Republic. Residents of Izhevsk have liked circus throughout the history of the city. In olden days the settlement was visited by vagrant performers — skomorokhs with mountain bears, strongmans and fakirs. Since the turn of the 19th century, shows took places in booths — temporary structures with benches for the rich and standing rooms for the poor.

The first Izhevsk circus was built by Aleksandr Koromyslov in 1895. It had existed till the Civil War began. On 21 September 1926, the Kolart Circus was opened. It was made of wood and seated 1,500 spectators.

In 1943, at the height of The Great Patriotic War, the stone circus building was erected in the Kolart's place. It was designed by P.M. Popov after the pattern of Ciniselli Circus in Saint Petersburg. On 29 November 1943, the wounded soldiers saw the first show there. The Circus seated 1,800 spectators and was considered one of the best ones in the Soviet Union.

On January 17, 2000, a cornerstone of new circus was laid. In September 2003, first formers from the whole of Udmurtia saw the show at the new circus. In the judgment of specialists, the contemporary building of the Circus is one of the best in Russia. It seats 1,800 spectators like the predecessor and have current technologies and high-performance audio and light equipment. The Circus has its own hotel called the Arena Hotel.

The International Circus Art Festival is held at the State Circus of the Udmurt Republic yearly on March since 2008. Circus stars come to Izhevsk from every corner of the globe. Members of leading world's circus art festivals and circus managers and producers from the United States, Germany, Italy, France and other countries enter into the festival jury. 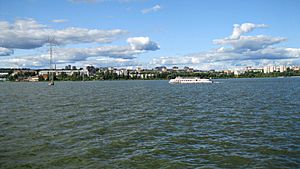 Motor ship at the Izhevsk pond

Izhvesk City Pond is now one of the city's most popular places for recreation. Its area is over 22 km, yet it was artificially constructed (in parts dug by hand) in the 1760s for industrial needs. Construction of the three-step industrial dam at the critical point where the two rivers (Izh and Yagul/Podborenka) join started both the pond and the city in April 1760.

The dam was reconstructed in 1809–1815 when Alexander Deryabin converted the original metalworking factory into the new arms producing facility. It was subsequently modernized again in 1983–1984 in order to extend the dam. Today a number of major Izhevsk industrial plants are still located along the pond.

In 1972, the Izhevsk Pond Embankment, a three-mile-long walkway and a system of boulevards and squares, was extended along the pond. Some consider the resulting esplanade and pond embankment one of Izhevsk finest attractions. The "Friendship of Nations" Square, with its central monument celebrating 400 years of Udmurtia's union with Russia, is a focal point of the esplanade and a hip place for youth recreation. During the summer months excursion boats operate from Izhevsk to the village of Volozhka.

All content from Kiddle encyclopedia articles (including the article images and facts) can be freely used under Attribution-ShareAlike license, unless stated otherwise. Cite this article:
Izhevsk Facts for Kids. Kiddle Encyclopedia.