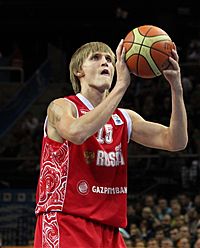 He played in the NBA with the Utah Jazz for 10 seasons and then played in Russia with his original team, CSKA Moscow. After playing a season with them, he returned to the NBA and signed with the Minnesota Timberwolves on July 27, 2012.

Kirilenko was named as Russia's flag bearer for the Opening Ceremony of the 2008 Summer Olympics games.

All content from Kiddle encyclopedia articles (including the article images and facts) can be freely used under Attribution-ShareAlike license, unless stated otherwise. Cite this article:
Andrei Kirilenko Facts for Kids. Kiddle Encyclopedia.