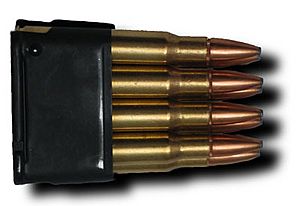 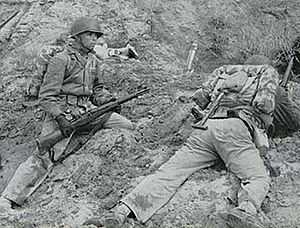 The M1 Garand is a semi-automatic rifle that was mostly used by the US Army during World War II and the Korean War. It has an internal eight-bullet box magazine, which is loaded with clips of 8 bullets. When the last round is shot, the empty clip is ejected, making a "ping" sound. A common misconception (seen in video games such as Call of Duty) is that the clip can only be removed by shooting all the bullets, but the clip may be removed at any time (but it is hard to do). General George Patton described it as the greatest battle implement ever designed. It was replaced by the M14 rifle in the late 1950's.

All content from Kiddle encyclopedia articles (including the article images and facts) can be freely used under Attribution-ShareAlike license, unless stated otherwise. Cite this article:
M1 Garand Facts for Kids. Kiddle Encyclopedia.