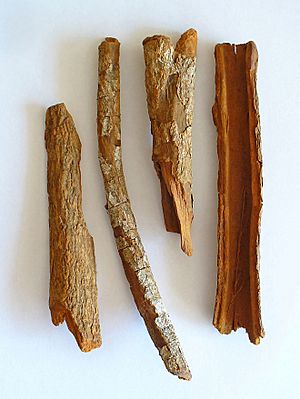 The bark of the tree (Cinchona officinalis) quinine is extracted from

Quinine is an alkaloid which can reduce fever, work against malaria, pain and swelling. The bark of the Cinchona family of trees contains quinine. Quinine can be made artificially, but this is more expensive than extracting it from the bark of the tree.

Quinine relaxes muscles, and was used by the Inca of Peru to stop people from shivering. Europeans first reported using quinine against malaria in Rome in 1631.

The best type of quinine used to treat malaria was found by Charles Marie de La Condamine in 1737. Quinine helped Europeans colonize Africa. A historian said that "it was quinine ... that gave colonists fresh opportunities to swarm into the Gold Coast, Nigeria and other parts of west Africa".

Quinine can cause cinchonism and even death (usually by pulmonary oedema) in some cases. Quinine can make someone paralyzed if it is injected into a nerve. It is very toxic in overdose.

Quinine has a bitter taste. It was first added to drinks like Bitter Lemon and Tonic Water Quinine was added to have some protection against Malaria. In China, it is sometimes added to drugs against the Common cold.

All content from Kiddle encyclopedia articles (including the article images and facts) can be freely used under Attribution-ShareAlike license, unless stated otherwise. Cite this article:
Quinine Facts for Kids. Kiddle Encyclopedia.