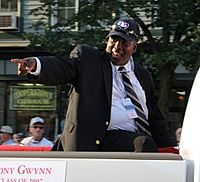 Tony Gwynn (May 9, 1960 - June 16, 2014) was an American baseball player. He was a Major League Baseball player for the San Diego Padres. He played from 1982 to 2001. Gwynn was elected to the Baseball Hall of Fame in 2007. His son, Tony Gwynn Jr, currently plays for the Padres. He has a brother named Chris who played for the Los Angeles Dodgers and the Padres.

All content from Kiddle encyclopedia articles (including the article images and facts) can be freely used under Attribution-ShareAlike license, unless stated otherwise. Cite this article:
Tony Gwynn Facts for Kids. Kiddle Encyclopedia.