Poway is a city in San Diego County, California, United States. The unincorporated community became a city on December 1, 1980. Poway's rural roots influenced its motto "The City in the Country". As of the 2010 census, the city has a population of 49,701 as of 2019.

Artifacts such as arrowheads, spear points, metates, grinding stones, and pottery found along the bed of Poway Creek all indicate an early Diegueño presence. Various pictographs adorn many of Poway's boulders, and modern dating techniques suggest these paintings date to the 16th century and earlier.

The original name of the valley ("Pawiiy" or "Pauwai") is derived from the Kumeyaay language of the Diegueño Indians who roamed the area for several hundred years before the Spaniards came. Traces of these Native Americans still remain in Diegueño.

Poway's contemporary history began in the late 18th century, when padres from the Mission San Diego de Alcalá kept cattle in the valley. Documents of Mission San Diego de Alcala record the name of the valley as "Paguay" as early as 1828. Though there is a discrepancy on the exact translation of "Paguay," the generally accepted version indicates "the meeting of little valleys" or "end of the valley." Some controversy also surrounds the proper spelling; historically it has also been written by the Mexican authorities as Paguai. It has also been written as Paui, Pauai, Pauy, and Powaii..

For approximately a century, Poway served as a stock range for the mission and local ranchos. In September 1839, Corporal Rosario Aguilar was granted Rancho Paguai a ranch in the valley and it was confirmed on May 22, 1840 but he refused it becoming Juez de paz in 1841 and moving instead to San Juan Capistrano.

American settlers began to come to the valley for farming purposes in the late antebellum period. Few records of this time have survived, and not until 1894 and the inception of the Poway Progress did the town's history become a thing of record. In 1887, about 800 people lived and farmed in Poway. Around the start of the 20th century, Poway farmers had moderate success in the production and vending of fruit, grain, and dairy products. The expansion, however, failed to follow agricultural success. Though the farmers prospered, the town existed in a static state for decades, varying only slightly in population, demographics, crop selection, and the like.

Poway has a creek and fertile soil, but the lack of easily available water prevented the settlement from attracting large-scale farmers and the accompanying population growth. Not until 1954 did the town establish the Poway Municipal Water District, which utilizes water from the Colorado River Aqueduct to irrigate all of Poway's 10,000 acres (40 km2). When water came to the town, people did as well. In 1957, following the sewer system's completion, developers built housing tracts, and modern Poway grew from there.

In 1980 Poway incorporated and officially became the City of Poway (nicknamed "the City in the Country") rather than a neighborhood of San Diego itself. Poway no longer relies on agriculture for its primary source of income and has instead transitioned into a residential community for those who work for employers in and around the San Diego area. According to a recent state government estimate, the population of Poway has grown since that last census to 50,542. It justifies its nickname of the "City in the Country" despite its burgeoning population because it has been designated a "Tree City" for the last decade.

Major portions of the town were evacuated during both the 2003 Cedar Fire and 2007 Witch Creek Fire.

In 2004, the City of Poway adopted the 1st Light Armored Reconnaissance Battalion, 1st Marine Division, based out of nearby Camp Pendleton. The Fred L. Kent Post 7907 of the Veterans of Foreign Wars has been the official go-between with the battalion, which has been redeployed at least once to Iraq since its adoption.

The pop-punk band Blink-182 originated in Poway, California in August 1992.

Though many residents today mistake Poway for an old Western-style cowboy town, its original roots lie in agriculture. The Homestead Act of 1862 encouraged Westward migration, and accordingly many of Poway's first white settlers came to farm. The fecund soil proved well-suited to a variety of crops, including peaches, Muscat grapes, apricots, pears, hay, and alfalfa. Some farmers captured swarms of wild bees and cultivated honey. Dairying also proved lucrative. Most families kept a cow for milk and butter, chickens for eggs and meat, and perhaps a hog to sustain them while they farmed. Crops sold well around the San Diego area. Between the seasons of 1894 and 1896, the Poway Progress reported bits of agricultural information such as:

Muscat grapes are beginning to ripen, and the San Diego market is getting a supply of the fine article Poway always produces. ... The season has been a prolific one for bees, thirty of forty stands the present season from a single captured swarm a year or two ago. ... The peach is a good article, and Poway produces it to perfection. Poway pears will compare with any grown in the state.

The success of these crops depended on the annual winter rainfall, however, and so remained subject to variations in precipitation until the establishment of the Poway Municipal Water District in 1954. With water readily available, the town's farming interest shifted to two principal crops, avocados, and citrus fruits. Ironically, despite the relative success of these ventures, Poway ceased to exist as a farming town once the water needed to make it a true agricultural haven appeared. With water came new residents, and the former farm town transformed into a locale full of small commercial businesses and modest shopping centers.

The Community Church of Poway, the town's first church, has remained in operation since 1887, making it the house of worship with the longest continual operation in San Diego County [1]. It is now affiliated with the United Church of Christ [2]. Today, Catholics, Lutherans, Methodists, Presbyterians, and Mormons constitute the majority of Poway's religious demographic. Living Way Church, a non-denominational Protestant church, through Berean Bible College, is the only church currently in Poway that offers bible college classes. There are two Catholic Churches in Poway, St. Michael's [3] and St. Gabriel's [4]. There is also a small Jewish community, with a Reform and a Conservative temple as well as a Chabad. A Sikh temple, one of several in San Diego County, is found in Poway. Two Kingdom Halls of Jehovah's Witnesses are located in Poway. There are nine congregations of The Church of Jesus Christ of Latter-day Saints located in Poway that meet in three meetinghouses.

Poway established its school district in 1871, but did not have a schoolhouse until 1885, when a one-room school was built at Midland Road about a 2–3-minute walk south of the Templar's Hall. The site is still in use today as an elementary school (Kindergarten through 5th grade), though it was torn down and rebuilt in 1945, and renovated again in 2004–2006. First through eighth graders were included in one classroom. Children learned to read and write using slates, and eventually progressed to study subjects such as arithmetic, spelling, English, language (German or Latin), grammar, history, and geography. Students did not usually attend high school, and had to travel to Escondido if they wished to do so. In 1909, only three students from Poway graduated from high school. Women who went on to more school from there usually had teaching ambitions. Education, while compulsory and considered a worthwhile pastime, had few far-reaching applications for Poway's farmers' children. Enrollment in the Poway School 1st–8th grades did not reach 100 until 1932.

Presently, the Poway Unified School District (PUSD) has grown to 25 elementary (Kindergarten to 5th grade), 6 middle (6th–8th grades), 6 high (9th–12th grades) schools, and even has a home-schooling program and a K–8 school. PUSD has a record of high performance, and one of its students, Anurag Kashyap (an eighth-grader at the time), became the 2005 National Spelling Bee champion after winning on the word "appoggiatura".

Poway's transportation history parallels that of early California. In 1888 the first stagecoach began to service the towns from San Diego to Escondido, including Poway. The stage made one stop in town, at the Poway Post Office, and also delivered mail to the farmers who would wait along the road for its arrival. The men would trot alongside the coach and inquire as to the state of the mail, and thus receive letters without requiring it to stop. Eight to ten passengers could accompany the stagecoach on its three-day journey for a modest $1.00 fee, or purchase a round trip for the bargain price of $1.50. The route itself, though not treacherous when passing through Poway, did pose a significant challenge to the team and driver at various points. Windy mountain trails often caused the stage to turn over, spilling both mail and passengers onto the rocky turf. The city of San Diego discontinued the stage line in 1912, when the advent of the automobile facilitated an easier and less time-consuming method of mail delivery. Poway established a County Road Station in 1920, to oil and maintain the roads so that automobiles could use them with ease. The road station remained in operation until 1961, when Poway achieved an 80% paved road rate. To this day, though, the town still boasts a number of dirt roads, for use by cars, horses, bikers, pedestrians, and hikers. Portions of what is currently Pomerado Road, a major north/south artery, were once U.S. Route 395 in California[5].

Poway's greatest change started in the 1950s when water came to the valley. On January 29, 1954, an election was held on the formation of the Poway Municipal Water District, which passed with an overwhelming majority of 210 ayes to 32 nays. At the second election on March 25, 1954, the citizens voted to annex to the San Diego County Water Authority. At a third election held April 22, 1954, the citizens voted to incur bonded debt of $600,000 to build a water system. The first water delivery was made in July 1954 to Gordon's Grocery on Garden Road. In 1972 Poway Dam was built to provide a dependable supply of water.

In 1957, the Pomerado County Water District was organized to provide sewer service to 1,610 acres (6.5 km2) along Pomerado Road. In 1959 the first subdivision homes were built and sold as Poway Valley Homes and Poway's population began to climb. On December 1, 1980, the City of Poway incorporated and the two districts, Poway Municipal Water and Pomerado County Water, became part of the City structure. The district issued a restriction for watering lawns. It allowed people to water their lawns three days a week each week. But, soon after a year or two, these restrictions were lifted. 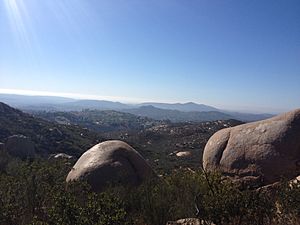 A view from Mt. Woodson Trail that leads to Potato Chip Rock in Poway.

Berean Bible College is a Charismatic Christian bible college located within Living Way Church. The college claims educational accreditation through the Accrediting Commission International for Schools, Colleges and Theological Seminaries, an unrecognized accrediting organization based previously in Beebe, Arkansas, now based in Sarasota, Florida. The college is also recognized by the U.S. Immigration and Customs Enforcement's Student and Exchange Visitor Program (SEVIS) to issue I-20 foreign student visas. The college awards associate's degrees, diplomas, and bachelor's degrees. The current president of the college is Rev. Douglas Balcombe and its current dean is Rev. Bobby San-Miguel.

All content from Kiddle encyclopedia articles (including the article images and facts) can be freely used under Attribution-ShareAlike license, unless stated otherwise. Cite this article:
Poway, California Facts for Kids. Kiddle Encyclopedia.