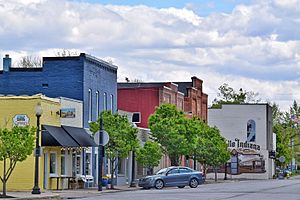 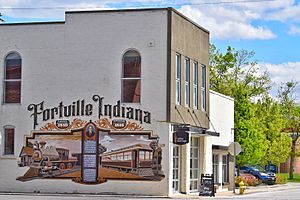 Fortville is a town in Vernon Township, Hancock County, Indiana, United States. The population was 3,929 at the 2010 census.

Fortville was originally called Walpole, and under the latter name was laid out and platted in 1849. It was named for Cephas Fort, the original owner of the town site. Fortville was incorporated as a town in 1865.

Browne-Rafert House was listed on the National Register of Historic Places in 2015.

Despite occasional droughts throughout central Indiana, Fortville has a steady and reliable supply of water because it is situated over a natural aquifer.

There were 1,553 households, of which 37.7% had children under the age of 18 living with them, 47.6% were married couples living together, 14.5% had a female householder with no husband present, 6.1% had a male householder with no wife present, and 31.7% were non-families. 26.8% of all households were made up of individuals, and 9.1% had someone living alone who was 65 years of age or older. The average household size was 2.53 and the average family size was 3.03.

The Town of Fortville, founded in 1849, has been named a Tree City USA community for six consecutive years. The original town was called Phoebe's Corner (Walpole Post Office) and located two miles northwest of the current town. It was literally moved when the Bee Line Railroad was built. A large statue of a pink elephant drinking a martini and wearing eyeglasses is located outside of a local liquor store in Fortville. Residents say this is one of the most recognizable landmarks in the town. Besides SR 67 that passes through the town, historic Main Street can be found north of its stoplight. This 1890s business district is lined with brick historic buildings, trees, streetlights with flower baskets and local shops. Festivals at Christmas and Bastille Day occur on the Main Street and the nearby parks.

Fortville is located 6 miles (11 minutes) Southeast from Hamilton Town Center / I69. It is 12 miles (21 minutes) from I465 and East 42nd Street on the East side of Indianapolis.

The entrance to Memorial Park is located just west of Church and McCarty streets.

The Fortville Redevelopment Commission was established in December 2002. The commission is responsible for the development of the industrial base within the Town of Fortville.

On April 8, 2003, the Town Council approved the resolution establishing approximately 26 acres (11 ha) of I-1 industrial property into a TIF district. The TIF district allows for the Municipality to install utility infrastructure to entice prospective partners to locate in Fortville. All of the lots in the Business Park have been sold. The two newest businesses are The Plaquemaker and Holloway House.

Economic Development is seen as an important factor in the success of the community.

The towns of Fortville and McCordsville have combined to form a Chamber of Commerce.

Fortville Action Inc. is a citizens group that has been instrumental in a grass roots redevelopment effort including the towns recognition as an Indiana Main Street Community.

Currently a comprehensive masterplan and Main Street redevelopment plan for the area is underway. The Master plan is entitled Envision Fortville with a steering committee composed of local residents, businesses, organizations and town council members.

The town houses schools for the Mt. Vernon Community Schools Corporation. The district houses three elementary schools, one middle school, and one high school. The schools regularly receive an "A+" score from the State of Indiana.

The town has a lending library, the Fortville-Vernon Township Public Library.

All content from Kiddle encyclopedia articles (including the article images and facts) can be freely used under Attribution-ShareAlike license, unless stated otherwise. Cite this article:
Fortville, Indiana Facts for Kids. Kiddle Encyclopedia.