Joliet is a city in Kendall and Will counties in the U.S. state of Illinois, 40 miles (64 km) southwest of Chicago. It is the county seat of Will County. At the 2010 census, the city was the fourth largest in Illinois, with a population of 147,433. A special census done in 2016 puts Joliet's population at 149,395 making it the 3rd largest city in Illinois. 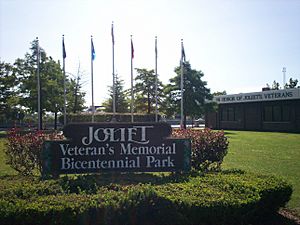 In 1833, following the Black Hawk War, Charles Reed built a cabin along the west side of the Des Plaines River. Across the river in 1834, James B. Campbell, treasurer of the canal commissioners, laid out the village of "Juliet", a name local settlers had been using before his arrival. The origin of the name was most likely a corruption of the name of French Canadian explorer Louis Jolliet, who in 1673, along with Father Jacques Marquette, paddled up the Des Plaines River and camped on a huge mound, a few miles south of present-day Joliet. Maps from Jolliet's exploration of the area, placed a large hill or mound on what is now the southwest corner of the city, since there is no point that is farther southwest. That hill was named Mound Jolliet. The spot was mined by early settlers and is now a depression. Just before the economic depression of 1837, Juliet incorporated as a village, but to cut tax expenses, Juliet residents soon petitioned the state to rescind that incorporation. In 1845, local residents changed the community's name from "Juliet" to "Joliet". Joliet was reincorporated as a city in 1852. Cornelius Cohenhoven Van Horne was active in getting the city its first charter, and because of this he was elected Joliet's first Mayor. When the city later built a new bridge it was named The Van Horne Bridge.

According to the 2010 census, Joliet has a total area of 62.768 square miles (162.57 km2), of which 62.11 square miles (160.86 km2) (or 98.95%) is land and 0.658 square miles (1.70 km2) (or 1.05%) is water. It has a sprawling, irregular shape that extends into nine different townships, more than any other Illinois city. They are: Joliet, Plainfield, Troy, New Lenox, Jackson, Channahon, and Lockport in Will County, and Na-Au-Say and Seward in Kendall County. Joliet is a Des Plaines River town, with the downtown located in the river valley. This is especially evident on Interstate 80 if one is coming from the east or the west where it has been flat for many miles and suddenly the land drops as you approach the river. This offers a great view looking north to see downtown Joliet. For most of its existence Joliet geographically has had its "west side" and "east side", referring to areas to the west or the east of the Des Plaines River, which runs through the city. Both sides were roughly proportionate throughout most of its history until the 2nd half of the 20th century when westward expansion began. Many businesses moved from the downtown area to the expanding areas west of the river. Many stores relocated to the west side in new strip malls and shopping centers with more parking and easier access. This began the decline of the downtown shopping district which is still felt today. Today Joliet has a "west side" and a far "west side" (which includes all city limits in Kendall County). This has given rise to a newly referenced "Central Joliet" portion of the city which essentially is all land west of the Des Plaines River and east of Interstate 55. This new reference may soon change the current meaning of "west side" to west of Interstate 55.

While the heart and history of Joliet is centered around the Des Plaines River Joliet actually expands across both the Des Plaines River and the DuPage River. There are several other waterways that traverse through the city limits including Hickory Creek, Spring Creek, the historic Illinois and Michigan Canal, Jackson Creek, and Aux Sable Creek. Some small lakes and bodies of water include Chase Lake, Lake Juco, Michigan Beach, the Brandon Road Quarry, and Leisure Lake.

As of July 2014, Joliet was the 169th most populous city in the United States. 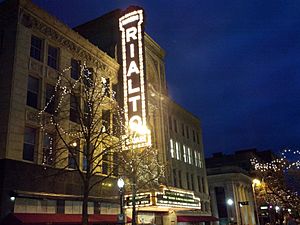 Among local landmarks are the Joliet Area Historical Museum and Route 66 Visitors Center as well as the Chicagoland Speedway (NASCAR) and the Route 66 Raceway (NHRA).

The Joliet Prison is located near Joliet's downtown district on Collins Street. The prison has been featured in both television shows and movies. One such television series filmed at Joliet Prison was Prison Break. The Prison was also used for the opening scenes in the 1980 movie, The Blues Brothers, which starred John Belushi as "Joliet" Jake Blues and Dan Aykroyd as Elwood Blues.

The first Dairy Queen store opened in Joliet. The location is now occupied by Universal Church.

The Rialto Square Theatre, a favorite haunt of Al Capone and filming location for scenes from Kevin Bacon's film Stir of Echoes, is on Chicago Street, downtown.

Near the theatre, the Joliet Area Historical Museum commemorates the history of Joliet, especially its heritage as a stopping point on U.S. Route 66.

There are two casinos which originated as riverboat casino in Joliet: the Hollywood Casino near Channahon and a Harrah's hotel and casino downtown. Joliet is the only city in the State of Illinois to have two casinos.

The Louis Joliet Mall is located near the intersection of I-55 and U.S. Route 30.

The Auditorium Building is located at the northeast corner of Chicago and Clinton streets. Designed by G. Julian Barnes and built of limestone in 1891, it was controversial as one of the first buildings to combine religious, civic and commercial uses. Nonetheless, people such Theodore Roosevelt visited and spoke at the building. The building was originally built for the Universalist Unitarian Church of Joliet; however, the church sold the building in 1993, and it is no longer home to the congregation.

The Jacob A. Henry Mansion, 20 South Eastern Avenue is a three-story, red brick, Second Empire/Italian Renaissance style structure built on a Joliet limestone foundation in 1873 (completed in 1876). The structure is set on bedrock and the entire basement floor is made of Joliet limestone from the building owner's quarry. The walls of the structure are constructed of red Illinois sandstone and deep red brick specially fired in Ohio (wrapped individually and shipped by barge to Joliet). A commanding three-story tower is the focal point of the structure. The structure has steel trim with slate shingles on a Mansard roof. The front and side porches are single slabs of limestone. The largest stone ever quarried to be the largest and best example of Renaissance Revival architecture still standing in the state of Illinois. The structure is a local landmark, part of the East Side National Register District and individually listed on the National Register of Historic Places.

The former Joliet Arsenal (now the site of both the Abraham Lincoln National Cemetery and the Midewin National Tallgrass Prairie) is in nearby Elwood.

There are four golf courses located in the city of Joliet, they are:

Joliet has 2 miniature golf courses at Haunted Trails located off of Broadway Street.

Joliet has a water park on Route 6 called Splash Station.

Pilcher Park, one of Joliet's oldest parks, is home to over 640 acres (260 ha) of land that provide a habitat for abundant wildlife and outdoor recreation. Pilcher Park also contains Native American Indian remains and was the site of a Potowatami Indian village. There is a burial mound just south of the entrance on Gougar Road. On the south side of the bridge next to gougers farm house. And a marked burial plot inside the park grounds.

Hammel Woods is also located in Joliet with miles of hiking trails and even a seven-acre dog park.

Splash Station Waterpark featuring the Midwest's only 6 person slide is also located on Route 6 in Joliet.

There are several miles of bike trails which wind through Joliet. The Rock Run and Joliet Junction Trails are roughly North/South routes that begin at the Theodore Marsh in Crest Hill, Illinois and have southern terminuses on the I&M Canal State Trail. These three paths can be used as a 16-mile loop through western Joliet. The I and M Canal State Trail stretches about 60 miles to Peru, Illinois for longer bike rides.

According to the official website for the city of Joliet:

Joliet's diverse faith community represents over 60 denominations and offers residents services at more than 150 churches, synagogues, and houses of worship. Along with their spiritual offerings, these houses of worship enrich the Joliet area by providing some of the area's finest examples of Romanesque, Gothic, Byzantine, and Renaissance architecture. The spiritual community in Joliet welcomes newcomers with open arms, offering regular worship services and religious education.

In the 1973 Academy Award-winning film, The Sting, the protagonist Johnny Hooker is from Joliet, and the film's story begins there.

In The Blues Brothers, John Belushi's Jake Blues is nicknamed "Joliet Jake" as he was imprisoned at the now closed Joliet Correctional Center.

The Joliet Prison has been a site for many other films and television shows, such as the film Let's Go to Prison, and the opening season of Fox's Prison Break was filmed predominately at the Joliet Prison, at which time part of the prison was still in use.

Joliet is portrayed in the television series Supernatural in the Season 2 episode "What Is and What Should Never Be" when the main characters stay at the fictional Joliet Motel.

All content from Kiddle encyclopedia articles (including the article images and facts) can be freely used under Attribution-ShareAlike license, unless stated otherwise. Cite this article:
Joliet, Illinois Facts for Kids. Kiddle Encyclopedia.