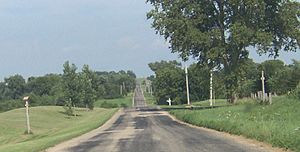 Terminal moraines, such as this one in central Kendall County, rise dramatically from the surrounding plain.

Kendall County is a county located in the U.S. state of Illinois, within the Chicago metropolitan area. According to the 2010 census, it has a population of 114,736. Its county seat is Yorkville, and its most populous municipality is Oswego.

Kendall County is included in the Chicago-Naperville-Elgin, IL-IN-WI Metropolitan Statistical Area. It was the fastest-growing county in the United States between the years 2000 and 2010.

Kendall County was formed in 1841 out of LaSalle and Kane counties.

The county is named after Amos Kendall. Kendall was the editor of the Frankfort, Kentucky newspaper, and went on to be an important advisor to President Andrew Jackson. Kendall became the U.S. Postmaster General in 1835.

Kendall County is a small, but rapidly growing county that has the majority of its population in the northeast, and along the Fox River (the only river in the county) which runs through the northwestern section of the county. Many new subdivisions have been constructed in this county, which has produced considerable population growth. Southern Kendall still remains largely agricultural. Kendall County has two primary ranges of low-lying hills formed by what is known as an end moraine. Ransom, the more predominant of the two moraines, runs through the west and north-central part of the county. This moraine has created elevations of over 800 feet (240 m), in contrast to elevations in southern Kendall County that drop to the lower 500 feet (150 m) range. Minooka, the other major end moraine ridge in Kendall County, runs along its entire eastern border with Will County. The two moraines intersect at almost a right angle in the township of Oswego. The only designated state park in the county is Silver Springs State Fish and Wildlife Area. 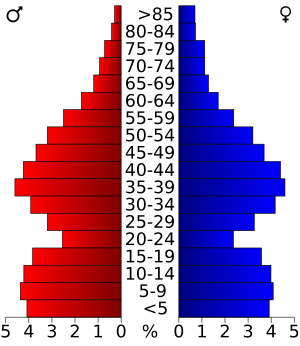 Kendall County was listed as the fastest-growing county in the US from 2000 to 2009, experiencing a population growth rate of 110.4% in this period. The reason for this growth is heavy suburbanization stemming from the metropolitan Chicago area.

The county is an 18-mile (29 km) square which is divided up into 9 townships. Each township is divided into 36 1 mile square sections, except that the Fox River is used as a Township border, resulting in Bristol being the smallest township with the extra area being assigned to Oswego and Kendall Townships. There are also two exceptions to the section grid to reflect Indian land grants under the Treaty of Prairie du Chien[disambiguation needed] in 1829: the Mo-Ah-Way Reservation in Oswego Township and the Waish-Kee-shaw Reservation in Na-Au-Say Township. These areas were eventually sold to European settlers.

Various locations within and around the City of Plano was used as a stand-in for Clark Kent's hometown of Smallville, Kansas in the 2013 film Man of Steel as well as the 2016 film Batman v. Superman: Dawn of Justice. Plano has also been used in the film Witless Protection, with both films having been filmed in Plano's historic downtown area. Filming has also been done south of Plano at the Farnsworth House, a Modern architectural landmark for various documentaries and commercials.

All content from Kiddle encyclopedia articles (including the article images and facts) can be freely used under Attribution-ShareAlike license, unless stated otherwise. Cite this article:
Kendall County, Illinois Facts for Kids. Kiddle Encyclopedia.