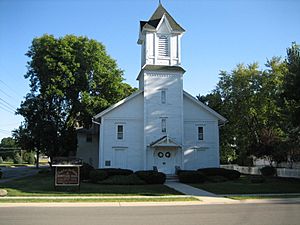 The Chapel on the Green, located in Yorkville, is the oldest church in Kendall County.

In 1836, the village of Yorkville was settled by early pioneers. Cars, buses and trucks have replaced horses, buggies and carts along the city’s main thoroughfare—Bridge Street (Illinois Route 47). Originally, Bridge Street was designed for horse-drawn carriages and pedestrians. As time passed, Hydraulic Street, which runs parallel to the Fox River, boasted a trolley that ran from Ottawa to Aurora (This part is now operated by the Illinois Railway), connecting Yorkville to Chicago and around the nation.

At the time, Yorkville's central business district was focused on the south side of the Fox River and the public square north of the river, a layout unique to this region. The public gathering place was located near the river's edge. The Kendall County Courthouse, adjacent to the downtown commercial district, served as the anchor and people generator of the day. Many of the city’s remaining historic single-family homes are found within walking distance of Bridge Street, the courthouse and Union Hall. It was resident Earl Adams who started it all. He built his cabin on Courthouse Hill on the south side of town in 1833. One year later, Lyman and Burr Bristol set up residency in neighboring Bristol, north of the river.

When the county of Kendall was formed in 1841, Yorkville was chosen as the county seat. After a 13-year period in which Village of Oswego claimed that honor, voters chose to relocate the county government in 1859 to a more centralized location.

Yorkville was chosen for that honor and the new courthouse was completed in 1864. Replaced in 1997 with a new courthouse on the north side of the city, the 1864 building, majestic in nature, still stands today and is used by the Kendall County Forest Preserve and other organizations. Yorkville was no exception to the railroad boom. Development began and businesses sprang up in 1870, along the tracks and included Squire Dingee's pickle factory, the Yorkville Ice Cream Company and the Rehbehn Brothers button factory. A few of those buildings are still remaining today.

The Village of Yorkville existed as two towns, one north of the river and the other south of the Fox River, with separate governments, for more than 100 years. In 1957, both towns had their own identity—Bristol to the north and Yorkville to the south. In that year, Bristol and Yorkville merged, becoming the United City of Yorkville. As a result, Ellsworth Windett became Yorkville's first mayor. As a part of the consolidation, the residents of both towns agreed to a uniform school district. It was in that same year that high school classes began in the downtown area at the northeast corner of Van Emmon and Bridge Streets. In 1888, a two-story brick school building on West Center Street was constructed. After the construction of Circle Center School in 1968, the two-story building was closed and the space was rented by the Yorkville School District to neighboring Waubonsee Community College. Due to rising enrollment in the early 1970s, the school was reopened and renamed as Parkview School.

There were 2,220 households out of which 42.1% had children under the age of 18 living with them, 62.8% were married couples living together, 8.9% had a female householder with no husband present, and 25.0% were non-families. 20.5% of all households were made up of individuals and 8.6% had someone living alone, who was 65 years of age or older. The average household size was 2.76 and the average family size was 3.22.

Raging Waves waterpark, the self-proclaimed largest waterpark in Illinois, is located in Yorkville. It opened in 2008 and it owns about 45 acres of property.

In August 2011, the movie Man of Steel was filmed at a house that was built specifically for the set in Yorkville. It appeared in the movie as the Kent family farm.

All content from Kiddle encyclopedia articles (including the article images and facts) can be freely used under Attribution-ShareAlike license, unless stated otherwise. Cite this article:
Yorkville, Illinois Facts for Kids. Kiddle Encyclopedia.