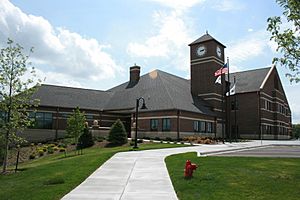 Oswego is a village in Kendall County, Illinois, United States. The village population, according to the 2010 census, is 30,355. Its population has more than doubled since the 2000 census count of 13,326. With that growth, Oswego is the largest municipality located completely within Kendall County.

Oswego is known to some Chicago area residents for the town dragstrip, open from 1955 until 1979, where muscle cars were raced by drivers from all over the Midwest. The drag days are celebrated today even though the strip has been closed for decades.

In 1833, William Smith Wilson, his wife Rebecca, and his brother-in-law Daniel Pearce moved to the area now known as Oswego. The land was officially owned by the local Potowatomi, Ottawa, and Chippewa tribes, but the United States government removed the Native Americans when the government started surveying the land along the Fox River in Kendall County. In 1842, the federal government placed the land for sale at an established price of $1.25 an acre.

After the sale of the land, Lewis Brinsmaid Judson and Levi F. Arnold from New York laid out the village and named it Hudson. However, when a post office was established, its location was given as Lodi. Confusion over the official name of the area led to a decision in January 1837, when the citizens gathered and voted Oswego as the permanent name of the village by a single vote. The ford across the Fox River in the town allowed Oswego to grow economically and as a town, eventually incorporated in 1852 with its village boundaries at the time being Harrison Street to the northwest, Jefferson Street to the northeast, Monroe Street to the southeast, and Benton Street to the southwest. At the advent of the automobile, Oswego continued to see growth as it became a hub for three different state highways (Illinois Route 25, Illinois Route 71, and Illinois Route 31).

Major community developments began when Caterpillar, Inc. and Western Electric decided to build industrial plants near Oswego in the mid-1950s. This initially allowed nearby Boulder Hill to develop. The next major development arrived in the mid-1980s during the suburban homebuilding boom, which allowed houses and buildings to populate the village. The rapid growth of the village allowed its limits to expand west of the Fox River into today's boundaries.

Oswego is located on the Fox River.

Downtown Oswego is home to historic buildings and homes, as well as shops and restaurants. The village of Oswego launched a project to enhance and restore the historic downtown district. This project included significant infrastructure and streets-cape improvements, such as the installation of brick paves, sidewalks, landscaping, and decorative streetlights and benches. Hudson Crossing Park, located along the Fox River, opened in October 2004 where many children and families enjoy the scenery. The Waubonsee Creek Promenade, which stretches from Main Street to the new park, is the final phase of the downtown enhancements. In 2008, the village celebrated its 175th anniversary. Several festivals are hosted in Oswego, including the annual Drag Strip Days, PrairieFest, Wine on the Fox, the Christmas Walk, and the Memorial Day Parade. The village also hosts the Oswego Country Market every Sunday from May through October. 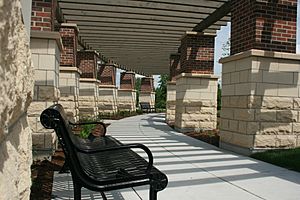 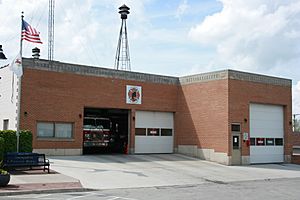 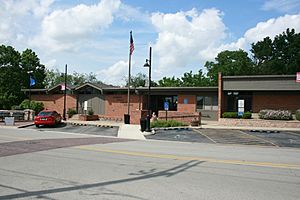 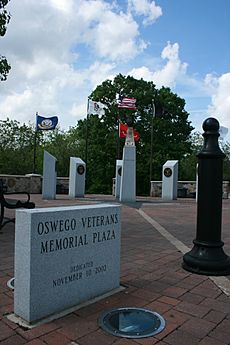 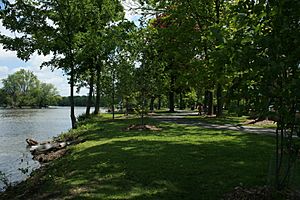 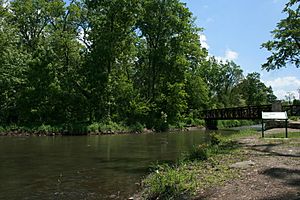 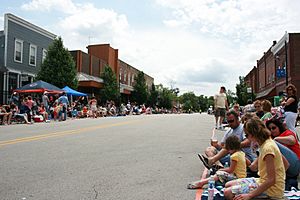 Oswego was ranked #58 in 2011 on CNN/Money Magazine’s Top 100 Best Towns to live. CNN Money ranks these towns based on their job opportunities, schools, safety, economic strength, and other qualities. Kendall County has continuously been ranked as one of the fastest-growing counties and a place of rapid job growth.

All content from Kiddle encyclopedia articles (including the article images and facts) can be freely used under Attribution-ShareAlike license, unless stated otherwise. Cite this article:
Oswego, Illinois Facts for Kids. Kiddle Encyclopedia.