Oswego is a city in Oswego County, New York, United States. The population was 18,142 at the 2010 census. Oswego is located on Lake Ontario in north-central New York and promotes itself as "The Port City of Central New York". It is the county seat of Oswego County.

The city of Oswego is bordered by the towns of Oswego, Minetto, and Scriba to the west, south, and east, respectively, and by Lake Ontario to the north. Oswego Speedway is a nationally known automobile racing facility. The State University of New York at Oswego is located just outside the city on the lake. Oswego is the namesake for communities in Montana, Oregon, Illinois, and Kansas.

The British established a trading post in the area in 1722 and fortified it with a log palisade later called Fort Oswego. The first fortification on the site of the current Fort Ontario was built by the British in 1755 and called the "Fort of the Six Nations."

Fort Ontario was destroyed by the French upon capturing it in the Battle of Fort Oswego, during the French and Indian War. Construction of a second British fort began on the same site in 1759, but Fort Oswego was only used as a cannon emplacement. During the American Revolution, the British abandoned the Fort, and in 1778, American troops destroyed it. In 1782, the British reoccupied Fort Ontario, and didn't forfeit it to the U.S. until 1796, thirteen years after the cessation of hostilities in the Revolution. During the War of 1812, a weaker American garrison at Fort Oswego was overwhelmed by superior British forces, in order to stem the flow of supplies from the interior of New York state. Throughout the 19th Century, the U.S. military maintained a presence at Fort Ontario.

During WWII the Fort was used to house "interned" mainly Jewish Refugees. (See the next section "Safe Haven.")

In 1946, the Fort was transferred to the state of New York. At that time, it was used to house veterans and their families during the post-war period.

Development of the fort as a historic site began in 1949, which included the "Safe Haven Museum" (see above). The current fort was built between 1839 and 1844. Major masonry improvements to the forts outer wall were undertaken, but left incomplete when in 1872, congress cancelled its funding. By 1901, the old fort was abandoned.

Today, Fort Ontario is being restored to its 1867-1872 appearance. Costumed interpreters recreate the lives of the officers, men, and civilians who garrisoned the fort in 1868-1869.

During the Second World War, the new fort was used as a "Safe Haven", (most importantly see Fort Ontario Emergency Refugee Shelter: and also Safe Haven Museum). This was an emergency refugee center for victims of the Nazi Holocaust, the only one of its kind in the U.S.

This was the only attempt by the United States Government to shelter Jewish refugees during the war.

Approximately 1,000 War refugee families were brought here from Italy, but deliberately only from other parts of Europe. They were all fleeing from the Nazis. They were deliberately chosen so that some were non-Jewish to allay anti-semitic fears.

They were placed in Fort Oswego, behind barbed wire, and given no official status, and were told they would be returned to their homelands after the war, and would have no rights as regards entering the United States. (In fact, due to political pressure, at the war's end they were allowed to stay in the U.S.A.)

Oswego was incorporated as a village on March 14, 1828, and the Oswego Canal, a branch of the Erie Canal, reached the area in 1829. The city was incorporated in 1848. When the city incorporated, its area and population were removed from the figures reported for the towns. In the 1850s, at the height of a popular water-cure movement occurring in the U.S.A., in turn stimulating growth, Oswego was the home of the Oswego Water Cure establishment, which Stonewall Jackson reportedly visited in August 1850.

Oswego is home to the Port of Oswego and once was a major railroad hub for several major railroads: the New York Central Railroad (NYC), the Delaware, Lackawanna and Western Railroad (DL&W), and the New York, Ontario and Western Railway (O&W) railways. Both railways operated a coal trestle for fueling steamships at the Port of Oswego. Former NYC and DL&W passenger stations remain, as does a NYC freight station. Nothing remains of the O&W, which was abandoned in its entirety in 1957. The tunnel from the former O&W is used as a rail trail. 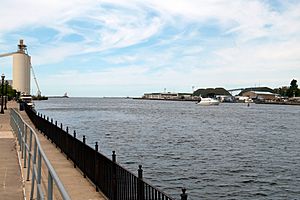 Oswego is located on the southeastern shore of Lake Ontario at the mouth of the Oswego River, about 35 miles north of Syracuse, New York and 69 miles east of Rochester, New York. The elevation is 298 feet above sea level.

As Oswego is located on the eastern shore of Lake Ontario, in the center of the Snowbelt, the region often sees prodigious lake effect snow accumulations. Oswego is one of the snowiest towns in America, with some winters totaling over 300 inches. In 2007, Oswego gained national attention when approximately 130" (slightly less than 11 feet) of snow fell in a two-week timespan. This broke the record of the Blizzard of 1966, which blanketed the city with 102" of snow. As a result of this storm, the school district closed all facilities for a week, effectively shifting the planned winter holiday.

Locations and communities near Oswego 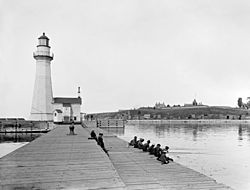 Oswego has a long history stretching back to the 15th century. Visitors can learn about the city's history by visiting museums such as the H. Lee White Marine Museum, The Richardson-Bates House, and Fort Ontario. Throughout the city and public parks, many historical monuments can be found honoring historical figures, and other forts that stood in what is now the historical district. The city includes a number of sites on the National Register of Historic Places including the Derrick Boat No. 8, Kingsford Historic District, Market House, Oswego Armory, Oswego City Hall, Oswego City Library, Oswego County Courthouse, Oswego Yacht Club, Tanner Block, and U.S. Customhouse.

The most notable historian was Rosemary Nesbitt, who is immortalized by a monument in the city's signature public park, Breitbeck Park. Every Halloween, she would traditionally let down her long silver hair, dress in a ghostly gown, and tell ghostly haunted tales spanning across the entire history of the city. Nesbitt, who also founded the Marine Museum and wrote various books about the city's history, died on August 2, 2009 at the age of 84.

Ludwig Bemelmans, the writer best known for his popular 'Madeline' stories, was stationed at Fort Ontario, Oswego, N.Y. from 1917. From this experience he wrote the book "My war with the United States" published in 1937.

Boating, fishing, and hiking are also activities that are enjoyed by residents and visitors. Oswego also has three ice-skating rinks, a large public pool located on the Fort Ontario grounds, bowling, and the historic Oswego Theater.

Every year the city hosts the Oswego Harborfest, a four-day festival of music, culture and food, centered around the Oswego Harbor, culminating in a fireworks display on the Saturday evening of the festival. The event is sponsored by local businesses, and the entertainment is admission-free. The festival continues to draw approximately 150,000 to 300,000 attendees every year.

In 2007, SUNY Oswego Lakers men's hockey team won the NCAA Division III Ice Hockey Championship. Garren Reisweber's goal 12:55 into overtime gave Oswego State a 4-3 win over Middlebury on March 18, 2007. The Lakers captured the school's first ever national championship in a team sport. The 2006-07 season marked the first season Oswego played in the newly built, state-of-the-art Campus Center, located on Lake Ontario. The Campus Center replaced Romney Field House which opened in 1964, and is believed to be the first ice rink built within the State University of New York system.

All content from Kiddle encyclopedia articles (including the article images and facts) can be freely used under Attribution-ShareAlike license, unless stated otherwise. Cite this article:
Oswego, New York Facts for Kids. Kiddle Encyclopedia.