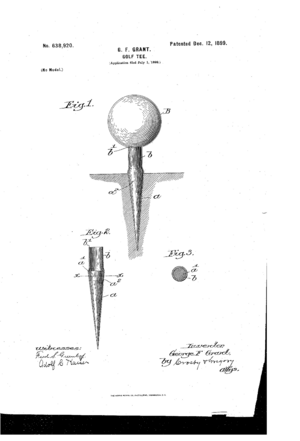 George Franklin Grant (September 15, 1846 – August 21, 1910) was the first African-American professor at Harvard. He was also a Boston dentist, and an inventor of a wooden golf tee.

Grant was born on September 15, 1846, in Oswego, New York, to Phillis Pitt and Tudor Elandor Grant.

He entered the Harvard School of Dental Medicine in 1868, and graduated in 1870. He then took a position in the department of mechanical dentistry in 1871, making him Harvard University's first African-American faculty member.

Grant was a founding member and later the president of the Harvard Odontological Society and was a member of the Harvard Dental Alumni Association where he was elected president in 1881. In 1899 he improved on Percy Ellis' "Perfectum" tee.

Grant died on August 21, 1910, at his vacation home in Chester, New Hampshire, of liver disease.

All content from Kiddle encyclopedia articles (including the article images and facts) can be freely used under Attribution-ShareAlike license, unless stated otherwise. Cite this article:
George Franklin Grant Facts for Kids. Kiddle Encyclopedia.