Chester is a town in Rockingham County, New Hampshire, United States. The population was 4,768 at the 2010 census. It was home to the now defunct Chester College (formerly White Pines College).

From Statistics and Gazetteer of New-Hampshire, 1875:

"Chester is considered one of the old towns of the state. In 1719, about eighty persons, chiefly from Portsmouth and Hampton, formed an association, for the purpose of securing a tract of land in the "Chesnut Country" (so called) and stationed three men upon this tract, to hold possession until they should procure a lawful title. After considerable difficulty they obtained a grant of land, ten miles [16 km] square. Immediately the settlement was commenced by several persons from Rye and Hampton, among whom were Samuel Ingalls, Jonathan Goodhue, Jacob Sargent, Ebenezer Dearborn, Robert Smith, E. Colby and S. Robie, who contributed largely to the permanent success of the enterprise. On the 8th of May, 1722 the township which had hitherto been called Cheshire, was incorporated under its present name, and comprising an area of over 120 square miles [310 km2]."

Chester once included Candia, set off in 1763. It may have been the first of the settlement grants by Massachusetts selected for expansion of growing populations in the seacoast. The name may be derived from Chester, the county town of the county of Cheshire in England. Earl of Chester is a title held by the Prince of Wales.

In 1822, a portion of Hooksett was taken from Chester. In 1845, the portion of the town known as Long Meadows was incorporated under the name of Auburn.

According to the United States Census Bureau, the town has a total area of 26.0 square miles (67 km2), of which 25.9 sq mi (67 km2) is land and 0.1 sq mi (0.26 km2) (0.42%) is water. The Exeter River rises in Chester. The highest point in town is found on an unnamed hill west of Bell Hill and northwest of Harantis Lake; it has two knobs of almost equal elevation of at least 635 feet (194 m), according to the most recent (2011-2012) USGS 7.5-minute topographical map. Chester lies mostly within the Piscataqua River (Coastal) watershed, though the western edge of town is in the Merrimack River watershed. 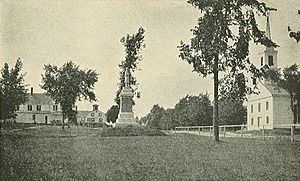 There were 1,214 households out of which 45.0% had children under the age of 18 living with them, 73.3% were married couples living together, 6.6% had a female householder with no husband present, and 16.7% were non-families. 11.8% of all households were made up of individuals and 4.3% had someone living alone who was 65 years of age or older. The average household size was 3.09 and the average family size was 3.38.

According to the most recent figures Chester has the third highest median property values in the state, and Chester residents have the highest median income.

All content from Kiddle encyclopedia articles (including the article images and facts) can be freely used under Attribution-ShareAlike license, unless stated otherwise. Cite this article:
Chester, New Hampshire Facts for Kids. Kiddle Encyclopedia.